Bain: From a California native, if you're going to the Holiday Bowl, here's what you should do

Matthew Bain, the Register's resident Southern California-raised reporter, dishes on the best things to do in America's Finest City.

Bain: From a California native, if you're going to the Holiday Bowl, here's what you should do

Hey, everyone. It's Matthew Bain, your Iowa-dwelling, Southern California-raised sports reporter. I grew up in Orange County, but I went to college at San Diego State and I can say this with certainty: San Diego is the greatest place in the world.

So, when the Iowa Hawkeyes drew their Dec. 27 Holiday Bowl matchup against the University of Southern California, I figured I'd help Iowa fans figure out how to maximize their time in America's. Finest. City. 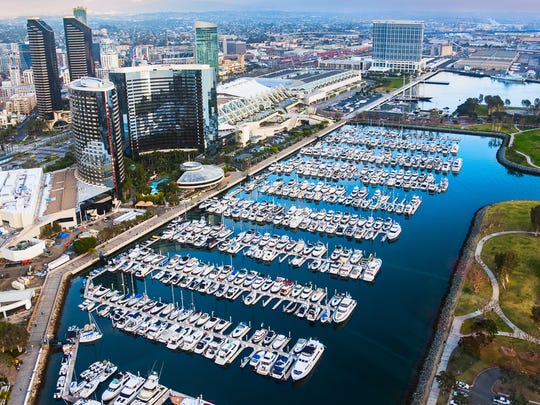 18. San Diego, Calif. (Hotel Cost: $39.33, Round-Trip Flight: $242) San Diego can be pricey to visit during the warmer months. But when the weather cools in this coastal city, so do prices. Find your corner of happiness at Balboa Park, which offers free admission to the grounds, Timken Art Museum and botanical gardens. You can also stroll through Seaport Village or go people watching in the Gaslamp Quarter while you enjoy a drink. (Photo: sandiegoa, Getty Images/iStockphoto)

First of all, one piece of advice for the game: If you're renting a car, don't park at SDCCU Stadium. It is not worth it. There's only one area to enter and exit the parking lot, and it turns into a hellish logjam pretty quickly.

Instead, take the trolley (basically an above-ground subway) to the stadium. I'd suggest you park your car at Mission Valley Center, Fenton Parkway or Alvarado Medical Center and then take the Green Line to the "Stadium" stop. The stop is literally connected to the stadium, so it's easy to arrive and leave, and it'll save you lots of time after the game.

OK, now, here's what to do beforehand (or with post-Christmas weekend):

Balboa Park is a must

You've heard of the San Diego Zoo, right? That's certainly worth a trip, but most people don't know the zoo is part of a gorgeously lush, 1,200-acre park with 16 museums and lots of gardens and trails to explore. I've visited quite a few of them, and my two personal favorites are the Air and Space Museum and the Museum of Man.

If you spend your morning in the park, you could go to nearby North Park or Hillcrest for lunch. North Park is basically San Diego's Brooklyn, and Hillcrest is its trendy, hip neighborhood. Both are wonderful areas with charming spots for lunch. 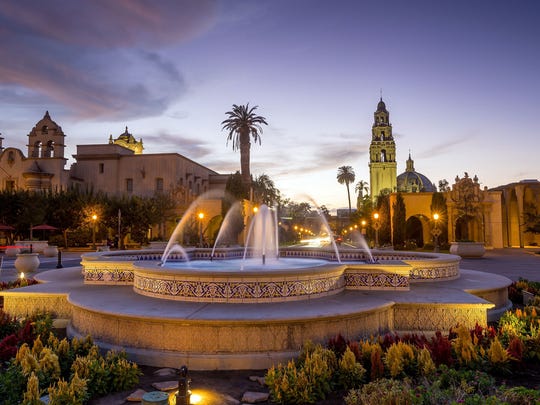 With 16 museums and countless trails and gardens, Balboa Park is one of San Diego's best places to visit. (Photo: iStock / f11photo)

A day at the beach

San Diego has no shortage of beautiful coastline to explore, but I like Pacific Beach.

Park your car at Belmont Park — an amusement park on the beach with a roller coaster, arcade and other shops/fair games — and then walk north along the shore until you get up to Pacific Beach. It's picturesque, and there's a delightful area of restaurants and shops.

If you're willing to drive a little further north, La Jolla Cove possesses an absurd beauty. Plus, if you go at the right time, you can see the famous La Jolla Cove seals relax on the sand after a long day in the water.

The beach on Coronado Island is also a popular spot. There's a naval base on the island, so you can see some pretty cool planes fly over while you're in the water or lounging on the white sand.

For a night out, my go-to was the Gaslamp District. Again, take the trolley. Don't mess with driving there. Parking isn't fun, and you probably won't want to be driving, anyway.

The Gaslamp is a 16½-block historical neighborhood which has been turned into one of the city's top spots for dining, bars, nightlife and entertainment. There are simply too many options for me to break down. The Gaslamp's website can help you with that. 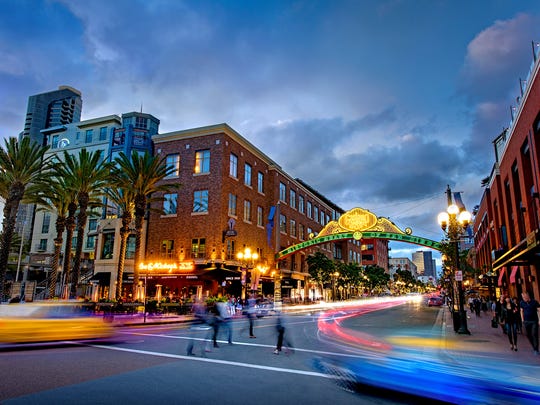 If you're spending a few days in San Diego for the Holiday Bowl, go out to the Gaslamp Quarter on one of your nights. (Photo: San Diego Tourism Authority)

The best burrito you will EVER eat ...

... is at Trujillo's Taco Shop, right next to San Diego State's campus. It's open until 4 a.m. on Thursdays and weekends, so you could even do this after the Holiday Bowl or a night out in the Gaslamp.

Order the California Burrito — a forearm-sized beauty with juicy carne asada, pico de gallo, cheese and the best ingredient: french fries. There are a couple hot sauce options on the table; I go with the bright red one. To drink, I'd usually order some horchata — basically a sweet, cinnamon rice milk that cools your mouth after a spicy bite.

Trujillo's has plenty of other delicious options, too. The Sigma Chi Crunchwrap was another go-to. Bottom line: You can't go wrong at Trujillo's.

Now that my mouth is watering, I'm going to stop writing and go eat.