Stone was a mainstay for Hawkeyes this season, racking up 70 tackles and being named second-team all-Big Ten Conference by the coaches.

Iowa safety Geno Stone will talk to a lot of people before deciding whether to pursue the NFL this year. Hear him describe his process: Hawk Central

Geno Stone was so reluctant to consider leaving his Pennsylvania home to play football at Iowa that his mother, Erin, needed to convince him to leave his room and take a simple recruiting phone call.

Three seasons later, Stone is leaving the Hawkeye program to take a shot at playing in the NFL.

Stone, who had been considering the move for the past month, made his official announcement on social media Monday.

"After serious discussion with my family, confidantes, and coaches (and a lot of prayers), I have decided to declare for the NFL Draft!" Stone wrote.

Stone was a second-team all-Big Ten Conference selection by the coaches after recording 70 tackles, breaking up five passes and forcing three fumbles in Iowa's 10-3 season. He tied for the team lead with four interceptions as a sophomore.

Stone is known for being a fearless ballhawk and a hard-nosed tackler. But, at 5-foot-10, 210 pounds, there will be questions about his size and speed at the next level. He is close friends with Amani Hooker, who also left Iowa after three years as a safety and was drafted in the fourth round by the Tennessee Titans a year ago. 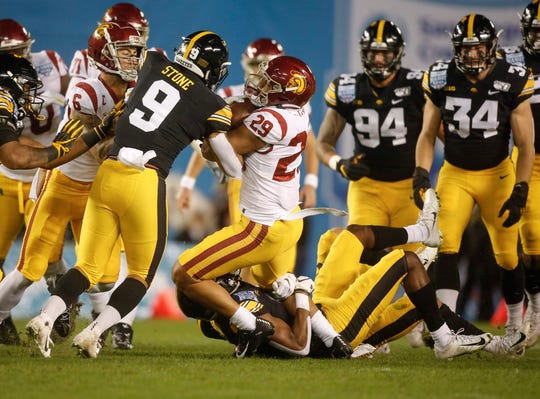 He also thanked his teammates, saying: "You made the last 3 years the best 3 years of my life. You guys are my brothers forever and wish you nothing but the best in the future."

Stone was the mainstay at safety for Iowa last season. Alongside him, Kaevon Merriweather got the initial call to start but lost that job after one game when he suffered an injury. He was replaced by Jack Koerner, who finished with 83 tackles and earned a scholarship.

Stone, a native of New Castle, Pennsylvania, was not heavily recruited. He was originally planning on attending Kent State before Iowa coach Kirk Ferentz made a late plea and won him over. With an assist from Erin Stone.