There's growing discussion about the college football season being pushed back until February 2021. Kirk Ferentz hopes that is a last resort.

As each week moves along during this COVID-19 pandemic, the conversation about college football — if and when there will be a season — seems to change … and get louder.

This week’s big topic has been the possibility of pushing the 2020 football season back to a 2021 starting date — perhaps in February or even March. That is a scenario that college football’s longest-tenured coach said he was aware of Wednesday, but one that would present myriad logistical challenges. 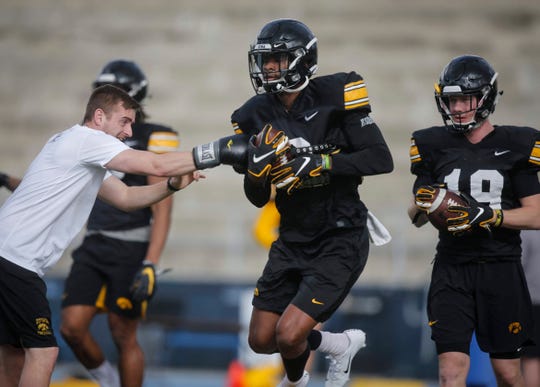 “I think the most optimal situation would be playing the season in its entirety, this year,” Iowa 21st-year coach Kirk Ferentz said during a Zoom conference call with a few dozen reporters. “… If they have to push it back a month and go right into Christmas, that might be a possibility. I think anything they can do to play this fall would be most advantageous.”

If that means a shortened season that doesn’t start until later this fall, that sounds like Ferentz’s preferred option, although he warned that things can change quickly. It was barely more than a month ago that conference basketball tournaments, with fans, were getting started across the country.

Perhaps the biggest complication with trying to start a season anytime this fall would be having campuses across the country open to students. If only select regions of the country have open access — meaning the ability to hold practices involving 100-plus men in close quarters — it’s difficult to imagine a season as we know it being possible to start this fall, let alone complete. That was why ESPN’s Chris Fowler, the voice of college football’s national championship game, over the weekend suggested this spring 2021 option was “gaining momentum” based on what he called “informed speculation.”

We are 20 Saturdays from the SCHEDULED start of CFB.. so how likely is that looking? What scenarios are being weighed? When will we know more? Who’s gonna decide all this? You sure are asking a lot of questions! And I get it. I’m starving for answers too. So here’s some “informed speculation” on where we are now after checking in with folks this week. I can only be so specific and people don’t want their names attached to this topic right now. But... here goes. Please comment with your take if you like. #cfb #collegefootball #football #sports @espn @espncfb

As USA TODAY Sports reported Tuesday, the impact of not having a college football season would alone mean a $78 million financial hit (on average) to athletics departments of Power Five programs. As a reference point, Iowa athletics' total operating revenues for fiscal year 2019 were a shade under $152 million.

Completing a football season — to collect lucrative TV revenues, even if it meant sacrificing millions in ticket sales and booster donations — therefore becomes a high priority for college athletic departments. A February 2021 start date could create issues like what to do about NFL draft-eligible players and whether non-revenue sports would survive while waiting for football money to roll in. But more pressing, in Ferentz’s mind, is player safety and whether potentially playing 24 or more games in a calendar year would be the right thing to do.

“If the answer is playing in February or March … first of all, how many games do you play? Do you go ahead and play the 12 or do you cut it back? That’s a question,” Ferentz said. “Then the follow up is, what’s it look like after that? And I think we’d have to be very careful there. I don’t know the answer.

“Can you play 24 games in a calendar year? My guess is you probably could. But let’s say you did that. It would dramatically alter what happens between the two periods. And I don’t know how hard you could train, how hard you could practice. All of those things are going to have to be on the board to discuss.”

Ferentz had previously expressed concern about trying to start a season without at least eight weeks of preseason training (four for strength and conditioning, four for on-field practices). There has been talk of slimming that down to six weeks or even four if necessary. That's a huge player-safety issue in Ferentz's mind.

These are complicated matters; yes, far less important in the grand scheme of things than the deadly coronavirus. But they are matters that require a resolution at some point. And there doesn’t appear to be an easy one in clear sight.

“It’s a really complex equation,” Ferentz said. “Before you start burning too many brain cells on that, let’s just kind of let things play out a little longer and see how it goes.”