Iowa's football coach since 1999, Ferentz tells media that he is hurt by what he is hearing and vows to make things better without saying how

The Iowa football coach speaks on June 3 about his role in speaking out on racism and police violence, as well as what he's trying to learn. Hawk Central

IOWA CITY, Ia. — Kirk Ferentz said Friday he’s had many candid conversations with his former Iowa Hawkeye football players in the past week, but that he hasn’t apologized to them for allegations that have been raised of racist behavior by his coaching staff.

Ferentz admitted to having “blind spots” when it comes to dealing with young Black athletes, but added that he isn't paying attention to every specific accusation being raised on social media about the program he's led since 1999.

Ferentz met with the media for the second time since a firestorm began on social media with ex-players singling out longtime Hawkeye strength coach Chris Doyle as a primary instigator for alleged racially insensitive language and boorish behavior. Doyle has been placed on administrative leave pending a review of those claims.

Ferentz expressed regret for what had occurred under his watch. He said the blame falls on him as the leader and vowed that change is already underway within the walls of the Hansen Football Performance Center. But, as was the case in a Sunday news conference, he didn’t offer much in the way of specifics about what that change entails on Friday afternoon.

“There were serious and troubling comments by many former players about their experience while they were on our team,” Ferentz said. “The coaching style by some was at times demeaning and created unnecessary frustration and anxiety. … We must be more inclusive and more aware.” 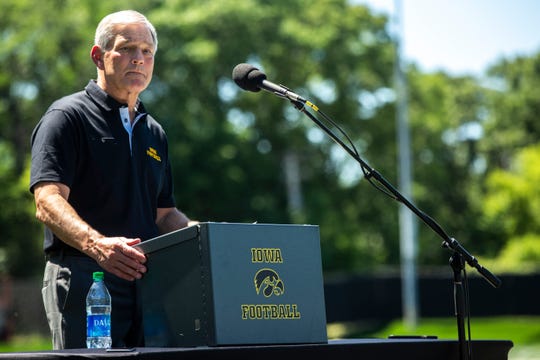 That awareness began a week ago, when Ferentz started talking with former players who had raised issues with how they were treated while on the team. Ferentz said he was startled and hurt by what he heard.

Ferentz was asked if he told those players that he was sorry.

“I don’t know that I apologized. I think they know how I feel,” he said.

Ferentz said that process began Monday, when veteran players arrived on campus to begin voluntary workouts under the direction of interim head strength coach Raimond Braithwaite. Instead, the players and staff had two days of meetings that became heated at times, Ferentz said.

Players were allowed to speak freely, and they took advantage of that.

Ivory Kelly-Martin, a running back entering his fourth year in the program, said he felt a change in the environment this week.

“(Before), it was an atmosphere where you did have to look out, kind of watch your back. You always kind of had to be on your toes at times,” said Kelly-Martin, who is Black. “But throughout this week, there’s been so many conversations that’s been made. There’s so many talking about change and we’re all hopeful that this is actually going to happen.”

What “this” is is still not clear.

“If there have been missteps, nothing’s been intentional,” Ferentz declared, even though the behavior former players ascribed to Doyle seemed to be aimed at Black players.

Doyle has denied ever engaging in racist or unethical actions. 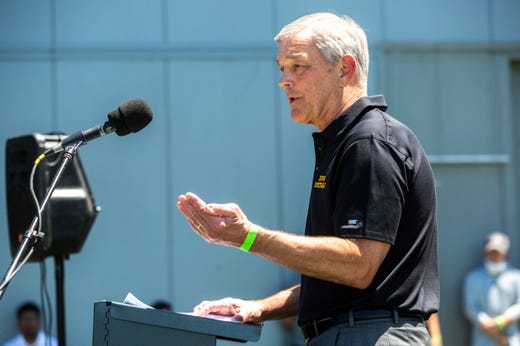 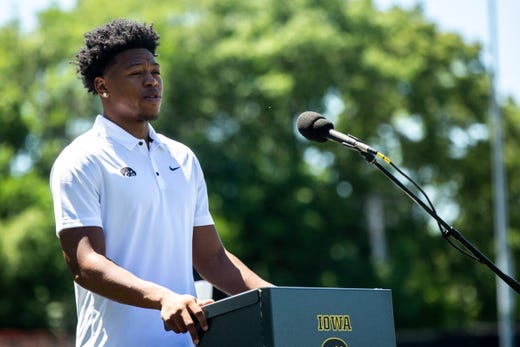 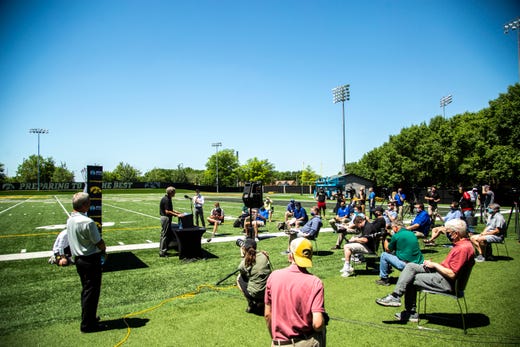 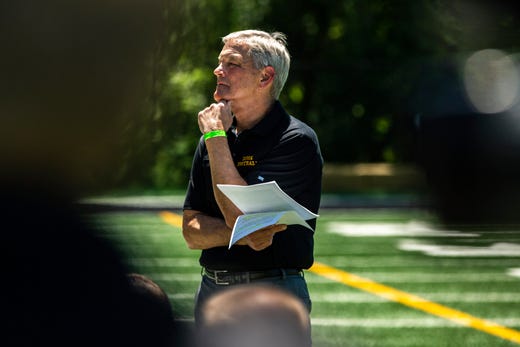 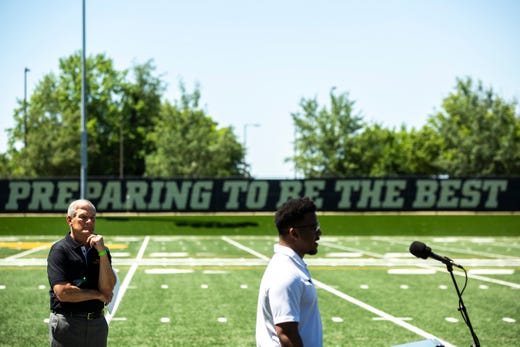 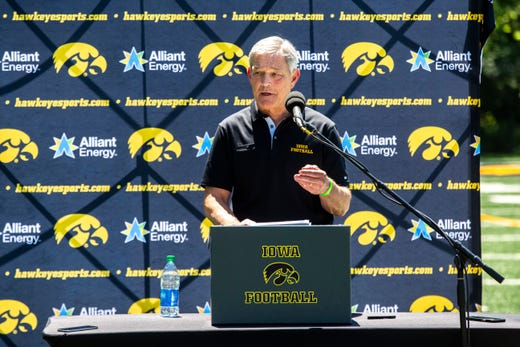 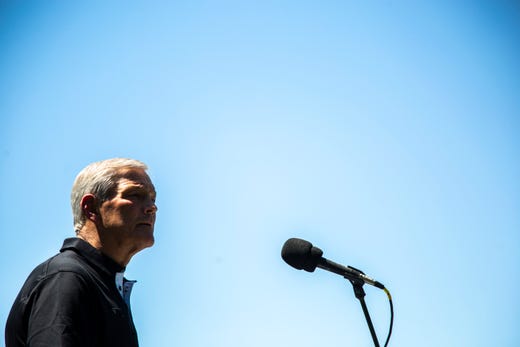 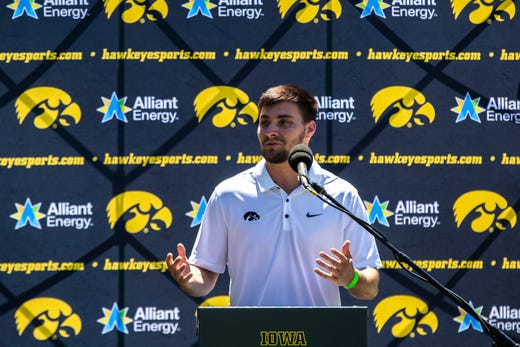 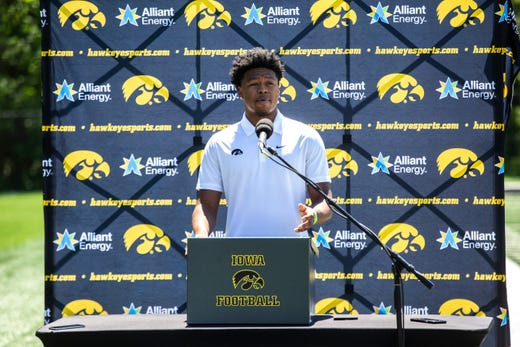 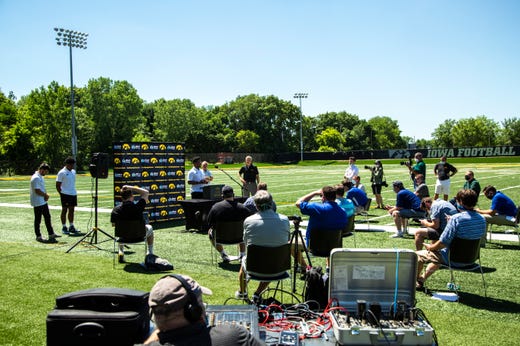 Iowa running back Ivory Kelly-Martin speaks during a press conference, Friday, June 12, 2020, in Iowa City, Iowa. The press conference was held outside with social distancing in place due to the novel coronavirus pandemic. Joseph Cress/Iowa City Press-Citizen
Fullscreen 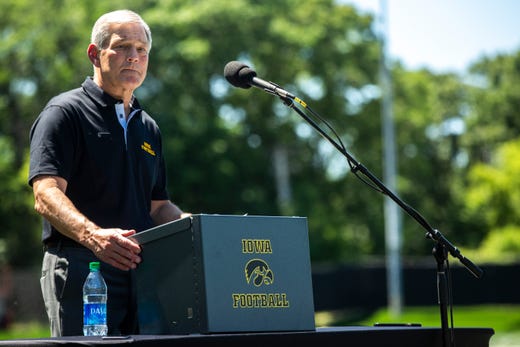 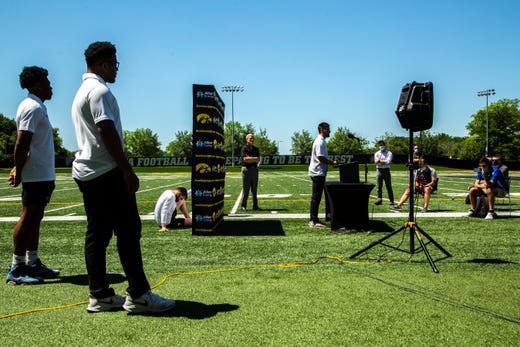 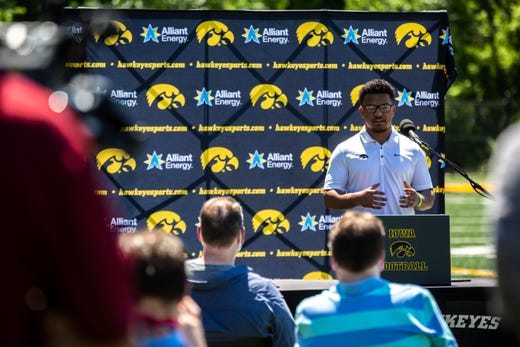 Ferentz again pointed to the formation of an advisory committee that will consist of 11 former Hawkeye players, led by NFL player Mike Daniels. Ferentz has lifted his long-standing ban on letting current players use Twitter, saying the policy was senseless.

And he said repeatedly that he is open to listening now in ways that he hadn’t been previously. He wants all players to feel comfortable coming to him directly with any concerns.

“The biggest question to me is, why the blind spot?” Ferentz said of Black players who felt stifled in his program with no way to be heard. “The former players were very forthcoming. They were very direct. The key here is to try to create an environment where everybody feels free to talk and say their mind and know that it’s going to be weighed and valued and measured.”

Ferentz did not comment on Doyle “out of respect for the process.”

He did not comment about his son, Brian, who is the team’s offensive coordinator and who also has been mentioned as problematic in his dealings with Black players.

Ferentz said he hasn’t been reading the specific issues that former players have raised on social media. Nor has he been reading many news accounts of the concern surrounding his program. He’s relying solely on his conversations.

“Quite frankly, I haven’t paid much attention to accusations. I really haven’t,” Ferentz said. “People that I’ve got a lot of respect for, when they have concerns, and when they try to tell me that there are things that I can do better, that’s important and powerful.”

Ferentz acknowledged that efforts to bring about change in his program must go beyond words. He knows he’ll be judged by his actions, whatever those end up being. For now, he’s still in the listening phase.

“It’s all about assessing where we’re at right now and where can we give more leeway and more trust. I think we’ve already made good steps starting this week. But we’re not done.”

Iowa athletic director Gary Barta, who has not spoken publicly since the racial bias allegations were first raised late last week, is set to meet with reporters next week. That is also when first-year football players will arrive on campus to join the veterans in voluntary workouts.