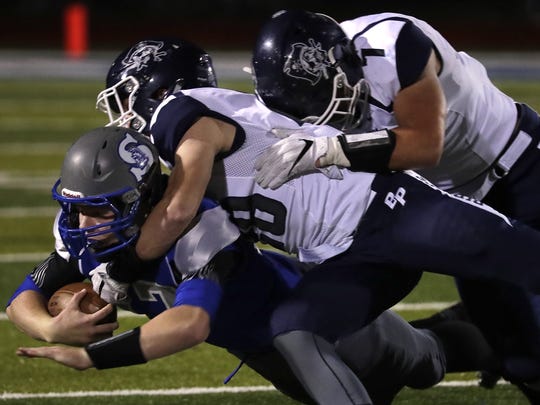 After playing his first three collegiate seasons at Northern Illinois University, the former Bay Port star announced Monday that he is transferring to the University of Iowa.

The 6-foot-4, 255-pound defensive end entered the NCAA transfer portal May 18, and the Hawkeyes were on his list from the beginning.

Lorbeck likes that Iowa is in the Midwest and that he gets the opportunity to play for a Power 5 school. His older brother, Zach, recently completed a standout track and field career at the University of Wisconsin.

He will see some familiar faces when he arrives in August.

Lorbeck has a good relationship with Iowa assistant Tim Polasek, who recruited him when he was coaching at North Dakota State University.

He will be joined by former NIU teammate Jack Heflin, who also transferred to Iowa this offseason. A former high school teammate, Jack Plumb, is entering his sophomore year as an offensive lineman with the Hawkeyes.

Lorbeck will graduate this summer and is eligible to play immediately in 2020, but he plans to redshirt to prepare for a senior season he hopes will help propel him to an NFL future.

An NCAA rule change from a few years ago also gives Lorbeck the opportunity to play up to four games this season while redshirting.

“I am super excited to go there,” said Lorbeck, who will start out as a walk-on. “It’s one of the better Big Ten programs, and they do a really good job of developing. That was something that was important to me going through the process of transferring. I wanted to go somewhere where I could develop.”

He didn’t get to play spring ball because of the coronavirus pandemic and has missed extensive training time. Taking his redshirt year could help make up for it.

“I played as a true freshman, so I didn’t have that extra year that I think I needed to play at the next level,” Lorbeck said. “That kind of weighed into the decision. The year sitting out is kind of in the plan.

“(COVID-19) definitely did factor into it. I’ve got one year of eligibility left. Do I want it to be a shortened season? I think I need all the games I can. That went into the decision, but more importantly, I just lost time. I came up quick. It just felt like the right decision.”

Lorbeck signed with NIU in February 2017 after a big senior season at Bay Port in which he was named both the Wisconsin Football Coaches Association’s defensive player of the year and the Fox River Classic Conference’s best defender.

He had 119 tackles and seven sacks at linebacker before transitioning to defensive end with the Huskies.

Lorbeck had 62 total tackles and 5½ sacks as a junior with the Pirates and received four offers from NCAA Division I Football Championship Subdivision schools before committing to NIU a couple of months before his senior year.

He was one of four true freshmen to play for NIU in 2017 and appeared in 12 games as a reserve.

He had 62 total tackles, including 12 for loss, in 38 games during his three seasons.

“I think the biggest difference is the game slows way down,” Lorbeck said. “As a freshman, you are kind of a deer in headlights out there. Everything is just so fast.

“From high school to college is a hard transition. It’s just faster and everything is more detailed. For me, I just kind of got thrown into it. It helped me grow as a player and get better.”

Our subscribers make this coverage possible. Click to see the Green Bay Press Gazette's special offers at greenbaypressgazette.com/subscribe and download our app on the App Store or Google Play.