The Iowa quarterback did not have his best game in Friday's 37-34 overtime loss to Nebraska.

The Iowa quarterback talked about a 7-5 regular season and the prospects of a bowl game. 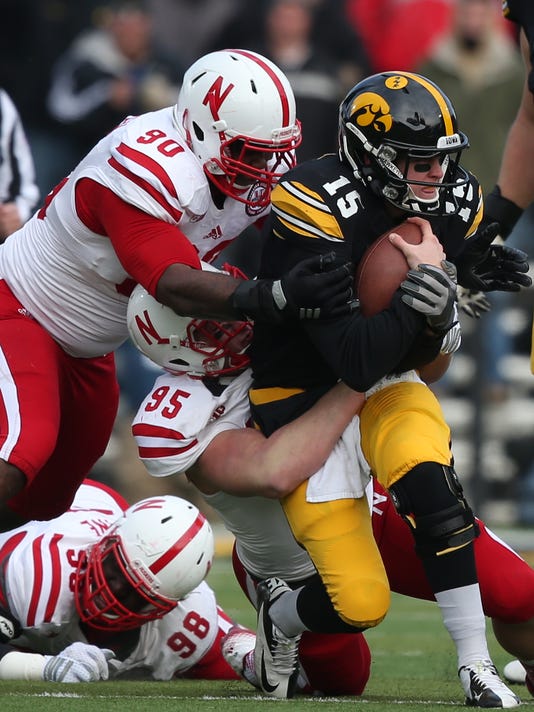 IOWA CITY, Ia. – Jake Rudock had regrets about his performance Friday against Nebraska, starting with the fourth of his 38 pass attempts.

"I wish I didn't throw a pick in the red zone," the Iowa quarterback said after a 37-34 loss in overtime.

Nebraska's Nate Gerry intercepted Rudock on a third-and-goal pass into the end zone after Iowa had moved the football impressively through a stiff wind on the game's opening drive.

It was an ominous beginning for the Hawkeyes. A drive that included a nice mix of runs and passes ended with a thud. Instead of maybe a 7-0 lead — or at least 3-0 — it was 0-0.

"The kid made a good play. I should've kind of felt him a little bit," Rudock said. "I didn't see him. Obviously, we don't want to turn over the ball in the red zone."

That theme repeated itself in the second quarter, again on third down inside Nebraska's 10 in a 0-0 game. Rudock had the ball swatted from his right hand as he began his throwing motion. It was ruled a fumble, and Nebraska's Trevor Roach recovered. Still 0-0.

"Turnovers, we can't have that," Rudock said. "It's better to come away with three than nothing, obviously."

The scoreboard showed 34 points for Iowa on Friday, but only 17 of those came in regulation from the offense.

"Offensively, we just didn't finish anything," said running back Mark Weisman, whose 30 career rushing touchdowns haven't increased in either of the last two weeks. "We had our chances in the red zone all day."

If Rudock could have a few throws back, he'd probably list his second-to-last attempt of the third quarter. After Nebraska had shaved Iowa's lead to 24-14, speedy Damond Powell broke wide open deep down the middle. Rudock overthrew him by a few yards. Instead of a quick-six to answer, Iowa punted.

Iowa coach Kirk Ferentz said he never considered pulling Rudock, who had the two turnovers, was sacked four times and finished 19-of-38 for 230 yards and two touchdowns.

"Quarterbacks get scrutinized because they're quarterbacks, but most players have ups and downs and have bad plays and what have you," Ferentz said, "and Jake certainly has had a few, too.

"But I thought he played really well."

"It's hard to think about the season right now," Rudock said. "Right now, it just hurts obviously after you lose a game. Especially one like that, where we had a chance to put it away and we didn't."

The Iowa coach reacts to a 37-34 overtime loss to Nebraska.