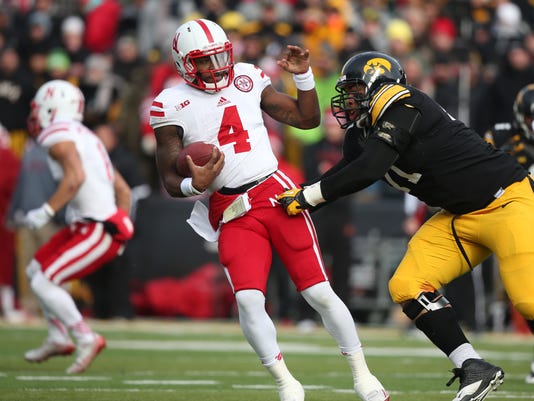 IOWA CITY, Ia. – Tommy Armstrong Jr. is generally not the type of quarterback who picks apart a secondary.

Yet, there the Nebraska quarterback was Friday, throwing for four touchdowns in a 37-34 overtime win at Iowa.

"(Armstrong) moved around the pocket when he felt pressure and did a good job getting the ball off," Hawkeye defensive tackle Carl Davis said. "That's what good players do, and I think he's a good player."

Armstrong typically torments defenses with his feet, averaging 5.2 yards per carry with five rushing touchdowns before arriving at Kinnick Stadium.

But when he was successful, it usually resulted in big gains.

"You start thinking he's going to run past the down marker, and then you lose the receiver."

"He's got some good receivers, too," Davis said. "Kenny Bell went up and made some tremendous plays."

It was frustratingly familiar for the Hawkeyes. Minnesota's Mitch Leidner, who is completing 51.1 percent of his passes, also threw for four touchdowns against Iowa.

"They made plays," Lomax said. "You've just got to give it to them."