Tennessee gets SEC back on track with rout of Iowa

The Southeastern Conference has a most unlikely flag bearer this postseason.

Tennessee gets SEC back on track with rout of Iowa 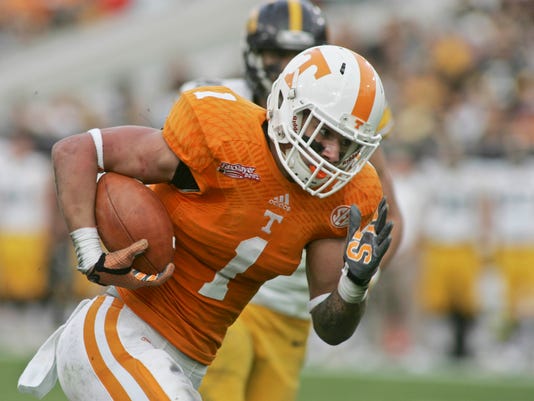 Tennessee Volunteers running back Jalen Hurd (1) runs for a 29-yard touchdown in the first quarter of their 2015 TaxSlayer Bowl against the Iowa Hawkeyes at EverBank Field.(Photo: Phil Sears-USA TODAY Sports)

JACKSONVILLE, Fla. – The Southeastern Conference has a most unlikely flag bearer this postseason.

A night after the conference was dethroned in the College Football Playoff with Alabama's loss to Ohio State in the Sugar Bowl, Tennessee did its part to restore the league's reputation by completely overwhelming Iowa in Friday's TaxSlayer Bowl 45-28.

The win was the program's first in a bowl game since the 2007 season. After the game, the Vols (7-6) seemed more than willing to be the ones who, in some small measure, helped restore the SEC's good name.

"We were moving tremendously fast the whole game," said running back Jalen Hurd, a freshman from Hendersonville, Tenn. "That did wear on them."

The Vols' win ensured the conference wouldn't finish with a sub-.500 record in bowl games. It also leveled the score between the SEC and the Big Ten at two bowl wins apiece this postseason in head-to-head matchups.

Dobbs said that the win gives Tennessee some much-needed momentum heading into next season, when the expectations will be much higher for the Vols than they were entering this year.

Although Tennessee's stated goal for the entire season was to reach a bowl game, not once Friday did the team seem willing to settle for just an appearance. 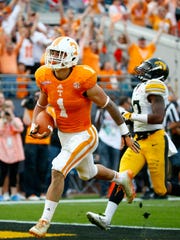 Jalen Hurd #1 of the Tennessee Volunteers crosses the goal line fo a touchdown during the TaxSlayer Bowl at EverBank Field on January 2, 2015 in Jacksonville, Florida. (Photo: Sam Greenwood/Getty Images)

After the program's longest bowl drought since the 1970s, Tennessee couldn't have looked more ready for Friday's game. The Vols scored on their first four drives, building an insurmountable lead.

"We wanted to start fast," said Jones, who had Tennessee in the postseason for the first time since the 2010 season, before he became head coach. "We thought that was critical in this game."

Although Iowa (7-6) outscored the Vols 21-3 in the final quarter, the outcome was never in jeopardy. In front of a partisan crowd — Tennessee fans took over the lower bowl of EverBank Field — the Vols played their most complete game of the season.

Facing the 18th-ranked defense in the country, Tennessee moved the ball at will. The Vols didn't face a single third down until midway through the second quarter.

Hurd gashed the Iowa defense early, reaching the second level with stunning regularity. He finished with 122 yards, just 3 shy of a career high.

"(Offensive coordinator Mike Bajakian) did a great job drawing up some plays to wear them down," Hurd said. "He knew that we were in better shape than them. I think we showed that."

Hurd also scored two touchdowns as the Vols opened up a 28-0 lead early in the second quarter.

"We wanted to get the ball to the edges and put the ball in the hands of our playmakers," Jones said.

Dobbs capped off a season in which he was thrust into the starting role by completing 16 of 21 passes for 129 yards with a touchdown and interception. He also ran for 76 yards and a pair of touchdowns.

Iowa had little success moving the ball until the second half. Coach Kirk Ferentz began the game by switching quarterbacks after each drive, and the Hawkeyes failed to establish a rhythm.

Iowa didn't score until less than four minutes remained in the first half. Tennessee countered with a nine-play, 75-yard touchdown drive, and any momentum the Hawkeyes had put together quickly evaporated, along with their comeback hopes. 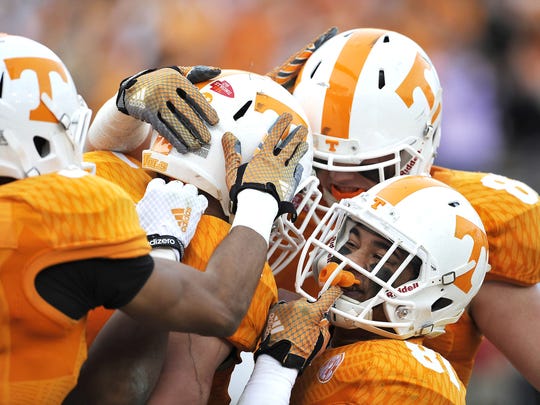 Tennessee running back Jalen Hurd (1) celebrates his touchdown with his teammates as theUniversity of Tennessee plays Iowa in the TaxSlayer Bowl during the first half Friday Jan. 2, 2015, in Jacksonville, FL (Photo: Larry McCormack / THE TENNESSEAN)