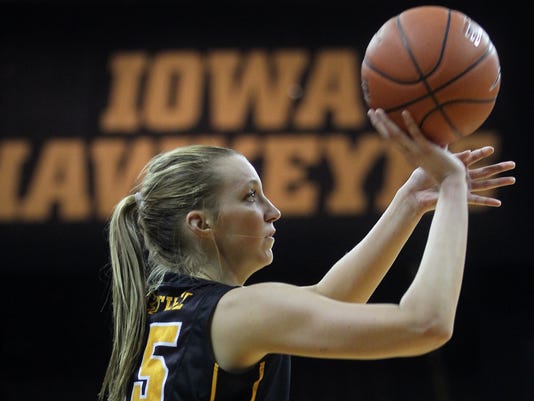 With only one game remaining before a holiday break in its schedule, the Iowa women's basketball team narrowed its focus early this week.

And that singular focus didn't have a thing to do with basketball.

Iowa took Monday and Tuesday away from practice to concentrate on finals before returning to the court for the first time this week Wednesday.

No. 23 Iowa (8-2) will begin preparation for its nonconference finale Sunday at Drake (4-5) later in the week.

"Its finals week and really our focus has been there and not on basketball the last few days," Iowa coach Lisa Bluder said. "That's where it needs to be because we have a lot of really good students on our team."

The Hawkeyes certainly earned a bit of a break.

Iowa went 2-1 during a grueling three-game, seven day stretch that started with a road loss at tenth-ranked Louisville.

The Hawkeyes ended the seven-day stretch with back-to-back home wins over Colorado and Iowa State and will bring that two-game winning streak into Sunday's 2 p.m. contest with the Bulldogs.

"I think it showed a lot about our team in the way that we were able to bounce back from Louisville," Iowa sophomore Ally Disterhoft said. "That stretch was important for us in a lot of ways."

With 10 days between the win over the Cyclones last Thursday and Sunday's matchup with Drake, the Hawkeyes spent some time working as individuals before taking a two-day break for finals.

The 10-day break without a game is the longest of the season for the Hawkeyes, who open Big Ten play Dec. 28 at home against Penn State.

"This week we really focused on ourselves as individuals and getting better," junior Kali Peschel said. "We haven't a lot of time in the past couple of weeks to really improve individual so this was a big time for us to improve fundamentally."

At least part of that practice time was spent on rebounding, a continued point of emphasis among the Hawkeyes.

Iowa has been outrebounded in each of its last five games, but was excellent on the glass in the second half against Iowa State.

After being outrebounded 21-10 in the opening 20 minutes, the Hawkeyes held a 27-20 rebounding edge in the second half including 11 offensive rebounds.

Iowa will try to build on that performance on Sunday.

"We've been working on our rebounding, our defense our physicality in practice," Iowa senior center Bethany Doolittle said. "They are going to play their best when they play us so we have to keep working hard and getting after it."