Charges stem from a series of break-ins earlier this year. 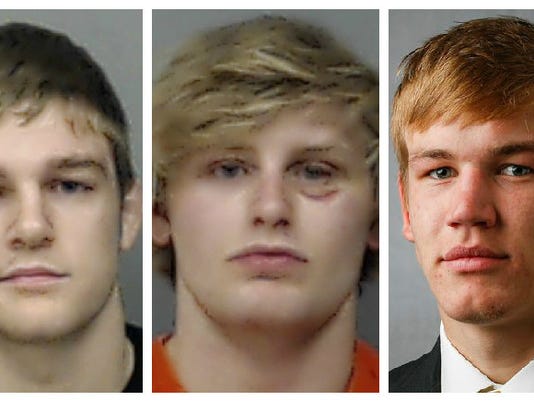 From left, Iowa wrestlers Seth Gross, Ross Lembeck and Logan Ryan were all dismissed from the team in May after being given felony burglary charges. Gross and Lembeck's photos are provided by the Linn County Sheriff's Department. The county did not have a booking mug from Ryan on file. Lembeck pleaded to lesser charges of being an accessory to a felony and first-offense drunken driving.(Photo: Linn County Sheriff)

Brands issued a one-sentence statement Monday afternoon, saying that Seth Gross, Ross Lembeck and Logan Ryan are no longer members of the team.

The three were arrested on alcohol-related charges March 18 in Marion after officers responded to a call for a theft in progress in the Hunters Ridge neighborhood. Police said at the time that burglary and theft charges were pending. Brands had previously suspended all three wrestlers indefinitely on March 23.

Gross and Ryan were expected to contend for Iowa's starting job at 141 pounds next season.

Gross was a three-time freestyle national champion and a three-time Minnesota state high school champion at traditional power Apple Valley. He compiled a 12-4 record while competing unattached this past season as a true freshman, and he won the Maryville Kaufman Brand Open.

Ryan was two-time state champion for Bettendorf, and he compiled a 22-6 record while competing unattached this past season as a true freshman.

Lembeck was a four-time state medalist at Linn-Mar. He went 7-4 in open competition at 157 pounds this past season as a true freshman competing unattached.