The No. 4 Iowa Hawkeyes set a national attendance record and beat No. 1 Oklahoma State in Grapple on the Gridiron at Kinnick Stadium Saturday, Nov. 14 in Iowa City. 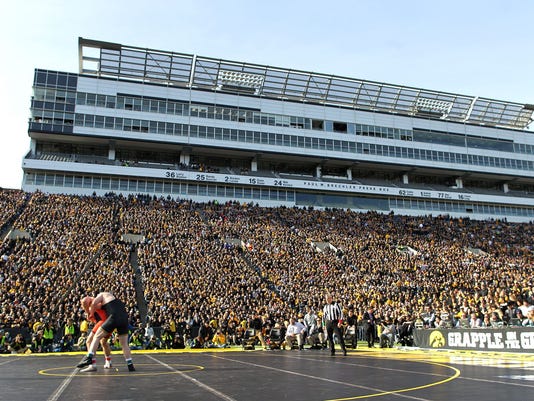 IOWA CITY, Ia. — It was a clash of college wrestling titans and a spectacle, all in one. A day when the sport put its best foot forward in record-setting style.

An NCAA dual match-record 42,287 fans, nearly triple the previous record, came to Kinnick Stadium to see No. 4 Iowa knock off top-ranked Oklahoma State, 18-16, in the Grapple on the Gridiron.

“This was an impact day for our sport,” wrestling icon Dan Gable said.

And while the results may turn out to be nothing more than a ripple in a long season, it could provide a spark for a sport that could use an assist.

“Our sport can always use good promotion,” Gable said.  “Sometimes we’re on the bubble a little, whether it be in college or internationally. And because of that, we need stuff like this. I feel pretty good about it.”

So did Sammy Brooks, Iowa’s ball-of-energy 184-pounder, whose technical fall of Jordan Rogers three matches from the end gave the Hawkeyes the lead for good and sent the crowd into a frenzy.

Brooks fueled their fire, flexing his muscles. It was an image captured on Kinnick’s south end zone jumbotron.

“I felt like my muscles were going to pop the roof off this place,” Brooks said.

The weather was perfect, the wrestling intense.

“It was a perfect storm,” Brooks said. “A great day for wrestling.”

An hour before the match started, Gable held court for a long line of admirers.  He signed his new book, “A Wrestling Life.” He posed for pictures. He shook hands. And he predicted the Grapple on the Gridiron would give the sport a boost.

FacebookTwitterGoogle+LinkedIn
Photos: Grapple on the Gridiron, Iowa vs. OSU
Fullscreen

Iowa fans Brandon Pratt and Jack Kaeding, 7, cheer on the Hawkeyes by pounding the walls during the Grapple on the Gridiron Iowa vs. Oklahoma State wrestling dual meet at Kinnick Stadium in Iowa City, Saturday, Nov. 14, 2015. Rachel Mummey/The Register
Fullscreen

Wrestling fans make their way to their seats prior to the Hawkeyes' dual against Oklahoma State at Kinnick Stadium on Saturday, Nov. 14, 2015. David Scrivner / Iowa City Press-Citizen
Fullscreen

Flags wave in the wind prior to the Hawkeyes' dual against Oklahoma State at Kinnick Stadium on Saturday, Nov. 14, 2015. David Scrivner / Iowa City Press-Citizen
Fullscreen 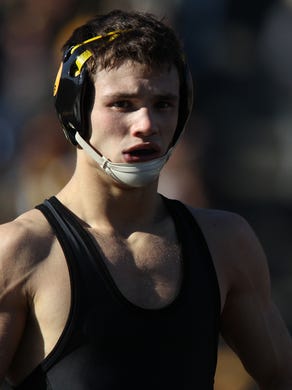 Oklahoma State coaches swarm the mat after a shove from Iowa's Thomas Gilman as he wrestles Eddie Klimara at 125 pounds during their dual at Kinnick Stadium on Saturday, Nov. 14, 2015. David Scrivner / Iowa City Press-Citizen
Fullscreen

The view from the Paul W. Brechler Press Box reminded me of a moment nearly 50 years ago. It also involved another top-ranked team.

No. 1 UCLA and No. 2 Houston played a basketball game in the Astrodome on Jan. 20, 1968. It was the first regular-season NCAA basketball televised nationally. Houston ended the top-ranked Bruins’ 47-game winning streak, 71-69, before a crowd of 52,693.

That was a game and a show all in one. So was the Grapple on the Gridiron.

“It was an incredible atmosphere,” Iowa coach Tom Brands said. “Even I can’t deny that. And I’m the one that likes to talk about the performance. But this was a performance within itself.”

The Iowa coach says winning the dual, not just the attendance record, was important.

Wrestling is part of the fabric in Iowa, a state with a passionate fan base for wrestling. It’s not that way nationally. There are 77 NCAA Division I programs now, a number that has stabilized in recent years.

Look for someone to take a run at Iowa’s record crowd in the near future. And if they do, it will do nothing but help the sport.

“We definitely set a standard (Saturday),” Smith said. “I don’t think people are going to sit around and go, 'You can have the record.’ It forces all of us to pay a little closer attention to creating great environments for dual meets.”

Hats off to Iowa, and the sport of wrestling, for thinking outside the box.