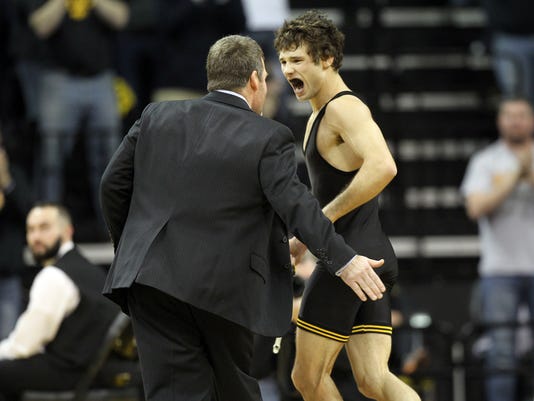 IOWA CITY, Ia. — Thomas Gilman was midway through the push-up portion of his post-match cooldown Friday night when he heard the eruption, felt the tremble and instantly knew the result.

The hardened veterans of the Iowa wrestling lineup can sense a pin inside Carver-Hawkeye Arena by sound and feel. As he poured in some extra training deep behind the bleachers inside the team’s practice room, Gilman paused from his routine to take in the invigorating reaction from the crowd of 11,174.

Cory Clark followed up Gilman’s fall by registering one of his own, rocket starting second-ranked Iowa’s 34-6 demolition of No. 23 Minnesota.

“We haven’t competed that much — not as much as I’d like — here at home,” said second-ranked Gilman, who ran his record to 18-0 at 125 pounds by pinning Skyler Petry 79 seconds into the dual. “The fans are hungry to see us compete and they’re hungry to see me pin guys and destroy guys. They loved, I loved it. I threw my hands up and embraced the crowd. There’s a lot of emotion there, a lot of emotion from the crowd.”

The emotion spilled into the 133-pound bout. Clark unlocked his high-octane offense with three opening-period takedowns and then put Sam Brancale on his back for a fall just before time expired in the second stanza, creating another roar from the home crowd that reverberated through the back tunnels of the arena.

“You hear it getting (louder and louder) and all of a sudden the crowd erupts and you look up and know he pinned him,” Gilman said. “I was a little tired. I knocked the rest of (push-ups) out.”

Though he won 15 of his first 16 bouts entering Friday’s dual, Clark hadn’t shown the high-level offensive attacks in recent weeks that made him an NCAA finalist last March. He ditched the cumbersome pad he had been wearing on his right knee in favor of a lighter version and shook his takedown slump, too.

The third-ranked junior scored three times in the first two minutes and positioned himself for a major decision before putting Brancale away with a fall.

“Each and every day I’m taking steps,” Clark said. “I haven’t necessarily felt progress earlier in the year, but for sure I can feel progress (now) and the thing with progress isn’t like it’s one day of hard work and you go out and it makes a difference. It takes weeks of hard work for it to show a difference. I feel like I’m getting to that point where I’m putting in enough days in the room for it to show up on the mat.”

The back-to-back pins by Gilman and Clark set the stage for Iowa’s 20th straight Big Ten win and the most one-sided dual in the border rivalry since 1992, when the Hawkeyes mauled Minnesota 44-2.

The Golden Gophers (7-7, 3-3) captured their two victories at 141, where seventh-ranked Tommy Thorn held off Brody Grothus 6-4, and 197, a marquee match that ended in chaos and controversy.

Minnesota’s Brett Pfarr scored a late takedown against Nathan Burak to go up 6-4. The third-ranked Iowa senior escaped with 10 seconds left, immediately shot in and dumped the fourth-ranked Gopher to the mat before time expired.

Referee Matt Zeitz ruled that Burak didn’t have control for the winning takedown and Brands ran to the scorer’s table to raise the protest flag. The call — and Pfarr’s 6-5 win — was upheld after video review.

“Burak’s the one that gets me,” Brands said. “We have this video review and we’ve just got to have an independent ref. The thing is, you can’t get an independent ref because it’s an Olympic sport and we’ve got to keep costs down. So you’ve either got to get rid of the rule because it takes you five minutes to get to the video review or you’ve got to make a true honest assessment of what happened out there and you’ve got to divorce yourself from all emotion from the previous call. It’s that simple and it’s by the rules.

“Some things I said on the radio, I’ll probably get fined. I don’t know. I’ve never been fined, I’ve never even been approached about a fine. I know you can’t talk about the officials and I’m not talking about the officials. I’m talking about the rules and how the rules are applied. Matt Zeitz is a good official, he’s a dang good official, he’s one of the best we’ve got. But that rule handcuffs him in that situation. (Burak) had both legs and from where I sit…”