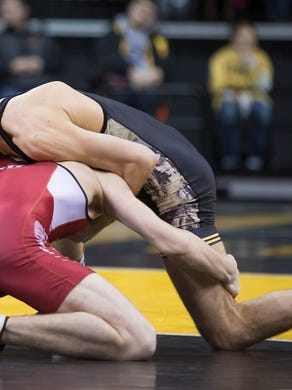 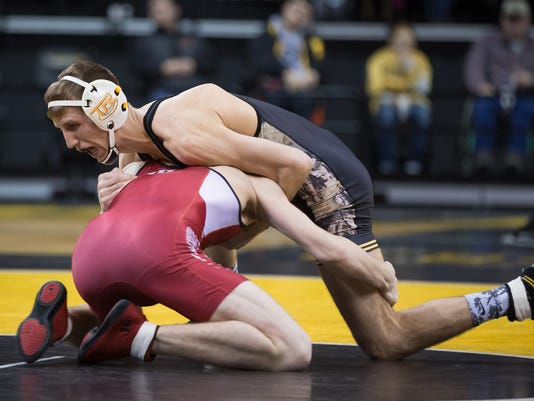 IOWA CITY, Ia. — Brody Grothus stifled a laugh Friday when he strolled through the Iowa wrestling complex and caught a glimpse of his coaches.

They billed it as Camo Night, and the Brands brothers cut no corners with these things. Iowa head coach Tom Brands showed up for work in a camouflage button-down shirt with his name embroidered above the left pocket. His twin brother, Terry, came decked out in camo pants for the dual against Indiana.

“I kind of chuckled, but all of a sudden both of those guys were on edge tonight,” Grothus said. “I think Indiana coming into our locker room and sitting in our locker room kind of ticked them off. They were trying to intimidate us. When (the Brands brothers) are fired up, there’s no time to smile and joke about it. But we’ll get our laughs in afterward.”

It might have been the unwelcome guests in the locker room. It could have been Iowa’s approach to going all-in with the theme of the night.

The Hawkeyes owned a 96-29 advantage in match points and scored 33 of the dual’s 36 takedowns.

The lone takedowns for the Hoosiers came in the first period at 174, where No. 11 Nate Jackson built a 6-2 advantage before Meyer controlled the last two frames. The 10th-ranked junior went ahead on a takedown with 52 seconds left and rode Jackson the rest of the way for an 8-7 victory.

“People don’t want to wrestle seven minutes,” Meyer said. “People want the easy way out. It’s human nature. If you watch college wrestling or high school wrestling, people want it easy. I don’t know what he was thinking, but it wasn’t going to be easy. I made it hard and came out on top.”

Alex Meyer scored a late takedown to win an 8-7 decision against No. 11 Nate Jackson.

The outcome of the dual was determined long before the late drama at 174.

Iowa stormed out to a 12-0 lead for the second straight home dual. Indiana forfeited to No. 3 Cory Clark at 133 and Grothus — inspired by watching Brooks ragdoll a Minnesota opponent last week — followed through on a pre-match promise by launching Tommy Cash for a first-period pin at 141.

“I told Brooks before the match, ‘I don’t care who I’m wrestling, I’m going to launch him. Watching you last week, I was so jealous. You’re sitting there throwing your dude around,’ ” Grothus said.

Tom Brands said the Hawkeyes are “getting closer to having a decision” at 141, where Grothus and high school teammate Topher Carton have split time during the second half of the season. The Iowa coach indicated he’s nearing a lineup decision at 165, too, where senior Patrick Rhoads used a takedown with 2 seconds left to seize a 4-2 win against Bryce Martin.

When Brands took inventory afterward and fielded a question about Iowa’s postseason readiness, the Iowa coach thought back to spurts of inactivity against the Hoosiers.