Take Five: The Midlands could teach us a lot about this Iowa Hawkeyes wrestling team

Spencer Lee, Pat Lugo and others will compete in Iowa's midseason competition this weekend. We'll learn a lot about the Hawkeyes in the process.

Take Five: The Midlands could teach us a lot about this Iowa Hawkeyes wrestling team

Iowa true freshman Spencer Lee discusses his debut and when he’ll wrestle next, with a fun interruption by coach Tom Brands.

HOFFMAN ESTATES, Ill. — The Midlands Championships has long been a part of Iowa wrestling’s storied history. No program has won more titles (26) heading into the 55th annual running of the event, which includes the last four in a row and eight of the last 10.

The tournament has long been a solid midseason competition for the Hawkeyes, who capped the first half of their dual season at 7-0 overall and 3-0 against Big Ten foes. Iowa, ranked No. 8 in Trackwrestling’s latest collegiate poll, will wrestle in a field that includes No. 9 Rutgers and No. 10 Arizona State, among others, as well as a slew of tough individuals from other schools.

But perhaps this year, we’ll learn more about this year’s Iowa team than in the past.

At the team’s media day in early November, coach Tom Brands asked for patience with regards to his lineup and how it came together. At that point, questions surrounded the Iowa lineup — specifically, there was curiosity if Spencer Lee would wrestle, if Alex Marinelli was healthy, who would emerge at 141 pounds, and if Pat Downey would qualify by the second semester.

“That means that this year, we're not going to know what we have until later on,” Brands said back in November, “and we're not in a hurry to get everything pieced together.”

Well, we’ve seen Lee dominate lower-tier competition at the UNI Open, and we’ll see him again this weekend at the Sears Centre Arena. Marinelli returned with a bang when Iowa beat Rutgers last month. That same weekend, Carter Happel gave himself an opportunity to seize the spot at 141. We’ll also get to see Downey wrestle this weekend, and perhaps get an update on his status.

This team is coming together, and if all of those parts flourish this weekend at the Midlands, the expectations for Iowa in the second half of the season may change drastically.

That’s the big-picture outlook of what to watch for this weekend. Here, we offer a Take Five of the little things to keep an eye on as the Hawkeyes take on the Midlands.

Do your thing, Spencer Lee

It’s weird to think that Lee, a guy that’s won three age-level world freestyle titles, could have a coming out party, so to speak, but that’s kind of what could happen this weekend. The true freshman blew through the UNI Open earlier this month, and the competition he’ll face this weekend will be undoubtedly tougher. 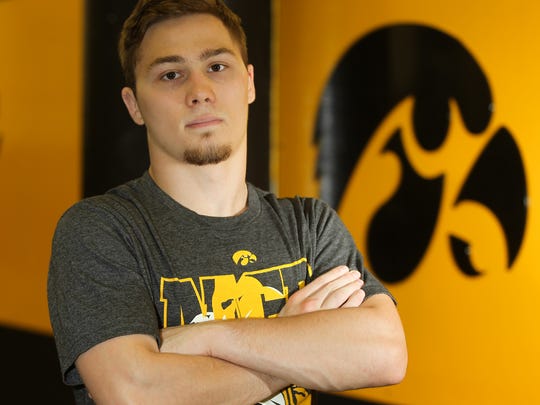 Many prognosticators are already looking ahead to a potential final between Lee and Nick Suriano, Rutgers’ second-ranked 125-pounder. (Full disclosure: I am, too.) But the rest of the field at 125 isn’t just a cakewalk.

Now, most of those wrestlers are on the outside of the top eight looking in — only Suriano and Russell (ranked eighth) are among Track’s top eight — but running through that field and winning would look a heck of a lot more impressive than winning the UNI Open.

Pat Downey will not wrestle this weekend

Downey was supposed to compete this weekend at 197 pounds, the same weight where he earned All-American status at the 2016 NCAA Championships while wrestling for Iowa State.

Unfortunately, Downey announced late Thursday afternoon on Twitter that he would not be competing this weekend, writing that, “(I) was super pumped (to) compete in the (Midlands Championships) but it looks like the boss has bigger plans (for) me!”

i was super pumped 2 compete in the @MidlandsChamps but looks like the boss has bigger plans 4 me! sorry 2 my fans & spectators who were looking forward 2 seein me compete. trust me, i’d love 2 b puttin on a show 4 yall in Chicago this weekend. won’t be much longer till i debut😎

Downey would've likely been a favorite this weekend. His status for the second half of Iowa's season remains up in the air. He was listed on the Iowa State undergraduate commencement program that occurred two weeks ago.

His next step: gaining admission into an Iowa graduate program.

We mentioned Happel earlier, but really, both 133 and 141 are weights to watch this weekend. Brands was clear that Phillip Laux holds a clear edge over Paul Glynn at 133 and that Vince Turk is “half a head ahead” of Happel at 141.

But Brands will change his lineup if one wrestler simply competes harder and finds more success over the other in tournament settings like this weekend. It wasn’t long ago that Brandon Sorensen seized the starting 149-pound spot at the Midlands during his redshirt freshman season.

Both are returning champions and the highest-ranked wrestlers at their respective weights. Neither should really have much trouble until probably Day Two, when the competition should, in theory, be tougher. 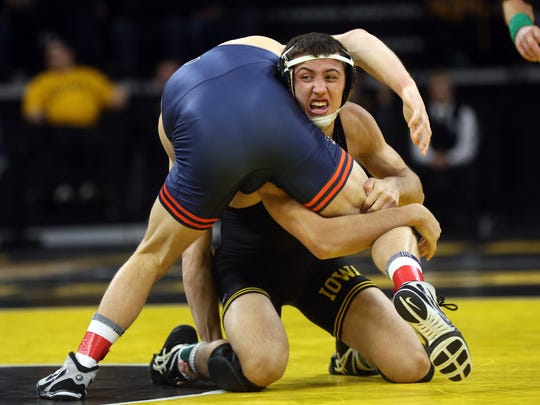 Sorensen, ranked second nationally at 149, may very well be on a crash course to wrestle Central Michigan’s Justin Oliver, who’s ranked third, in the finals this weekend. Princeton’s Matthew Kolodzik, who’s ranked seventh, is also in the field, but outside of those three, the only other real threat might be Arizona State’s Jason Tsirtsis, a former NCAA champ who transferred from Northwestern.

For Kemerer, there is not much in the way of competition. Arizona State’s Joshua Shields is a former teammate of Kemerer’s back at Franklin Regional in Pennsylvania (where Lee also attended high school). They could clash in the finals, which would be fun.

They should dominate, in other words. And if the Hawkeyes are to win a fifth-straight Midlands team title, they’ll need Kemerer and Sorensen to take care of business when possible.

Other Hawkeyes (and Cyclones!) to watch

The Midlands is an open-style tournament, which means anybody can wrestle. Dan Gable actually wrestled in this prestigious event way back during the 1966-67 season, when true freshmen weren’t allowed to wrestle at the varsity level. He won it, because of course he did.

A handful of Iowa true freshmen will get some run this weekend. That includes Lee and Warner, of course, but also Max Murin, who’s slated to go at 141, and Aaron Costello, at heavyweight.

We should also get to see Pat Lugo wrestle. Lugo, a two-time NCAA qualifier at Edinboro, transferred to Iowa ahead of this year but is stuck behind Sorensen at 149. It’ll be nice to see him get some mat time this weekend.