The Hawkeyes are 8-0 so far this season, but a tough schedule awaits in January and February.

Iowa head coach Tom Brands watches during the outdoor dual at Kinnick Stadium on Nov. 14, 2015. Brands is trying to set the stage for a program comeback, and adding Mark Perry with the Hawkeye Wrestling Club is a good move.(Photo: David Scrivner, Iowa City Press-Citizen)Buy Photo

After competing against just three ranked foes in their first eight duals, the third-ranked Hawkeyes (8-0) now enter a stretch where they’ll wrestle six consecutive duals against teams currently ranked in Trackwrestling’s latest Division I poll — including four in the top eight.

That slate begins when No. 8 Oklahoma State invades Carver-Hawkeye Arena at 3 p.m. Sunday. The Cowboys (6-0) bring with them nine ranked wrestlers — again, using Track — for a battle between the country’s two most decorated wrestling programs.

“This team coming in (Oklahoma State) is in that championship-caliber ranking,” Iowa coach Tom Brands said Wednesday, “and we’re probably just outside of that, but this is a great opportunity to position ourselves in that category, which is where we want to be. I like our team.”

Sunday’s dual will be the first major test for Iowa. The schedule doesn’t get much easier, either. The Hawkeyes travel to No. 1 Ohio State next week, welcome No. 5 Michigan the week after, then host No. 18 Minnesota and No. 18 Northwestern (they’re currently tied) in a Friday-Sunday doubleheader to open February, before ending the stint at No. 2 Penn State the following week.

The previous three ranked foes the Hawkeyes wrestled were No. 25 Rider, No. 17 Illinois and No. 12 Rutgers — and that doesn’t count seeing the Scarlet Knights, No. 9 Arizona State and No. 15 Central Michigan at the Midlands Championships in late December.

“We have a big opportunity against a highly-ranked opponent,” Brands said. “We have some really good wrestlers where, when they get ready to go, good things happen.”

All will have crucial roles in Sunday’s contest, as each of them will take part in a bout pitting two ranked wrestlers. There will be six such matches when Iowa and Oklahoma State clash.

Sunday’s contest will be the 52nd all-time meeting between two programs that have won a combined 57 NCAA team titles (Oklahoma State 34, Iowa 23). The Cowboys lead the all-time serie, 28-21-2, but the teams have split the past six meetings, and the dual before that was a 15-all tie in the 2010-11 season.

“I’ve been watching these two teams historically battle for a long time,” said Lee, who added that he was in attendance two years ago when the Hawkeyes and Cowboys wrestled inside Kinnick Stadium in an event dubbed “Grapple at the Gridiron.”

“It’s always been a hard-fought, fun dual meet. I’m pretty excited to be part of it.” 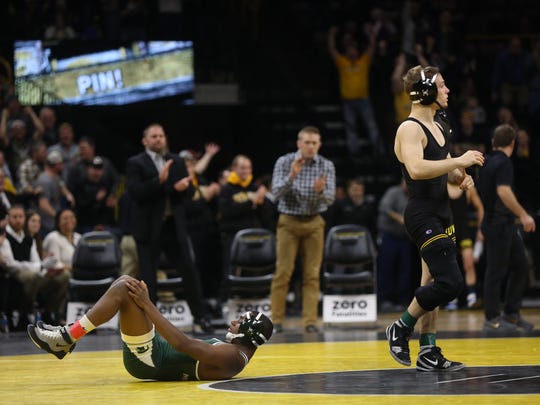 Lee will be making his first appearance in the rivalry, as will five other Iowa wrestlers — Marinelli, Joey Gunther at 174, Mitch Bowman at 184 in addition to either Paul Glynn or Phillip Laux at 133 and either Vince Turk or Carter Happel at 141 (Brands said all four will weigh in).

As such, it’ll be their first exposure to a likely raucous crowd. It won’t be the 42,287 that sat inside Kinnick Stadium and watched an 18-16 Iowa victory, but Brands said about 9,000 tickets were already sold by Tuesday. (The last time this matchup was in Carver, 10,414 was the official attendance.)

Brandon Sorensen will be making his fourth appearance in the rivalry. The senior 149-pounder has some small words of advice ahead of this big dual and the many to follow.

“Just stay calm, stay focused, get to your attacks, wrestle your style and get to where you need to be,” Sorensen said. “This is a highly-ranked opponent, probably the highest we’ve seen all year. Maybe some scores are going to be harder to finish.

“There’s going to be little things that are going to be very important in this dual that guys need to capitalize on. It’ll show where we’re at and what we need to do.”