The Big Dance begins next week at Quicken Loans Arena in Cleveland, Ohio. 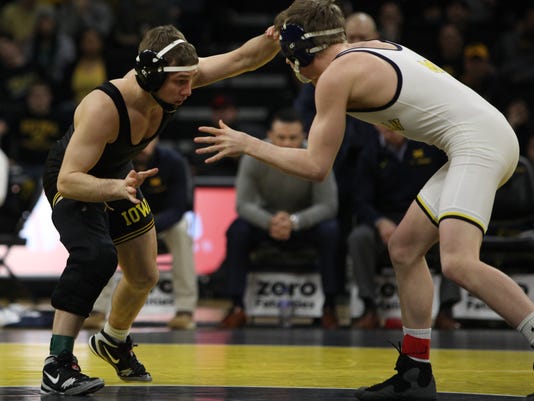 Iowa's Spencer Lee wrestles Michigan's Drew Mattin at 125 pounds during the Hawkeyes regular-season meet against Michigan at Carver-Hawkeye Arena in Iowa City on Saturday, January 27, 2018. Lee won his match with a 15-0 technical fall whereas Iowa would ultimately lose to the Wolverines 17-19 in team points. (Ben Roberts/Freelance)(Photo: Ben Roberts/Special to the Register)

Collegiate wrestling’s crown jewel — that is, the NCAA Championships — is still a week away, but on Wednesday evening, the brackets were released, serving as an appetizer for the action that’ll take place in Cleveland.

Much like our basketball counterparts do during this month, we now have time to analyze and dissect and maybe even pick each of the 10 national champs that’ll be crowned on the night of March 17 inside Quicken Loans Arena.

Here, we offer a quick rundown and thoughts on the draws for the Iowa, Northern Iowa and Iowa State wrestlers.

The star freshman will face the pigtail winner between Cal-State Bakersfield’s Sergio Mendez and Chattanooga’s Alonzo Allen in the first round. Lee could see Purdue’s Luke Welch, who he beat for third at the Big Ten tournament, in the second round, followed by Oklahoma State’s Nick Piccininni in the quarters and Ohio State’s Nathan Tomasello in the semifinals.

Schwarm, a potential darkhorse at this weight, gets Michigan’s Drew Mattin in the first round. Win, and he’ll get top-seeded and defending NCAA champ Darian Cruz of Lehigh on Thursday night.

No Iowa, Iowa State or Northern Iowa wrestlers in this bracket. South Dakota State’s Seth Gross is the one seed, and Michigan’s Stevan Micic, last weekend’s Big Ten champion, is the two.

Alber drew Eastern Michigan’s Sa’Derian Perry in the first round, and could meet Penn State’s Nick Lee in round two before a potential quarterfinal matchup with Meredith on Friday morning. This weight class is deep and all sorts of fun.

Turk was unseeded and drawn in the pigtail match against Lock Haven’s Kyle Shoop. Winner gets Indiana’s Cole Weaver in round one, and the winner there gets top-seeded Bryce Meredith from Wyoming. 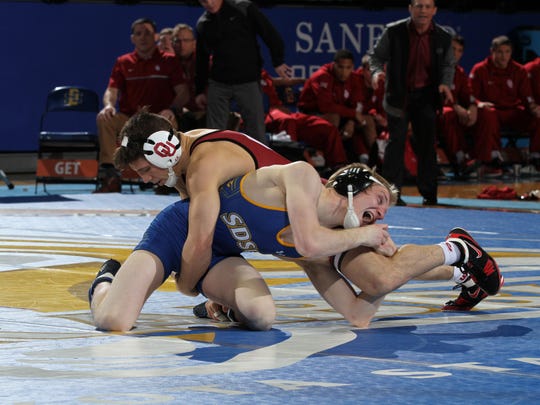 Pohlmeyer, a Johnston grad, went unseeded after earning one of the at-large bids for 141. He drew Illinois’ 11th-seeded Michael Carr in the first round. Winner likely gets Oklahoma State’s Dean Heil in round two.

Sorensen drew the two seed here, which is just as surprising as water being wet. His path to the finals includes a potential quarterfinal against either Northwestern’s Ryan Deakin or Arizona State’s Jason Tsirtsis and a possible semifinal against Missouri’s Grant Leeth or even Central Michigan’s Justin Oliver, who Sorensen beat to win the Midlands. Thomsen being the nine seed puts him in the bracket’s top half. He could meet Oklahoma State’s Boo Lewallen in round two, which would be a rematch of the Big 12 final, won by Lewallen. Winner there likely gets top-seeded Zain Retherford in the quarters.

Degen is in his first national tournament after a third-place finish at the Big 12 tournament. He drew Nebraska’s Colton McCrystal, a former Sergeant Bluff-Luton standout, in the first round. Winner likely gets Northern Carolina’s fourth-seeded Troy Heilmann in round two.

Springer, a graduate of Davenport Assumption, went unseeded and drew Retherford in the first round. Luck can sometimes be tough.

This weight was a tough one to seed, but Kemerer drew the six behind N.C. State’s Hayden Hidlay (one), Missouri’s Joey Lavallee (two), Penn State’s Jason Nolf (three), Arizona State’s Josh Shields (four) and Michigan’s Alec Pantaleo (five). Kemerer and Nolf is a potential quarterfinal match, which would be a heck of a way to begin Friday morning.

Interesting decision to put Marinelli at the five, ahead of Rutgers’ Richie Lewis and Michigan’s Logan Massa, two guys that beat him at Big Tens (Massa beat him twice). The committee must like Marinelli’s resume. He could see Minnesota’s Nick Wanzek in round two, Rider’s Chad Walsh in the quarters and Illinois’ Isaiah Martinez in the semifinals if he wins.

Yes, Richie Lewis has #IowaTies —  he was a two-time All-American at Iowa Central before transferring to Piscataway. He has a path to see Penn State’s Vincenzo Joseph in the quarterfinals. Lewis gets Campbell’s Quentin Perez first, then could see Nebraska’s Isaiah White on Thursday night. There are 11 Big Ten wrestlers in this weight, which is crazy. 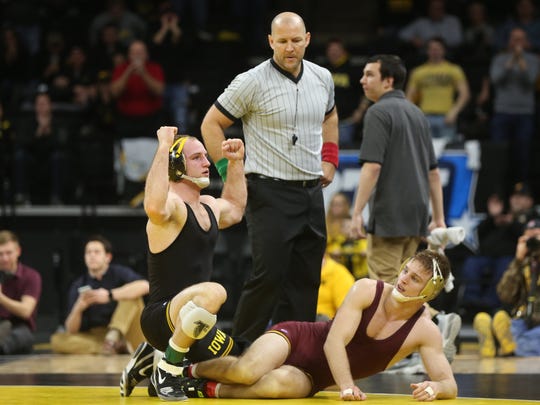 Lujan drew the seven, which means he’s on the bottom half of the bracket. He has Virginia’s Will Schany first, then could meet North Carolina’s Ethan Ramos on Thursday night. Winner there likely gets Penn State’s Mark Hall in the quarters.

Mejias, a two-time junior-college national champion at NIACC, drew the 14 seed, which also places him in the bracket’s bottom half. He gets N.C. State’s Daniel Bullard first round and could match up with Missouri’s Daniel Lewis on Thursday night.

Gunther went unseeded and fell into the top half of the bracket here. He wrestles Oklahoma State’s Jacobe Smith first round, which could be a big match with regards to the team race. Smith beat Gunther 3-1 in the dual back in January. 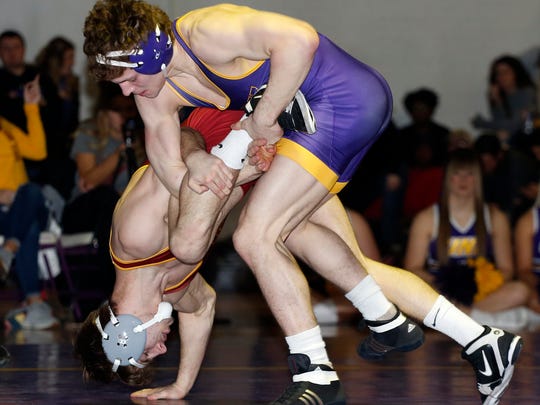 Foster was placed in the bracket’s top half, and gets Arizona State’s Kordell Norfleet in round one. Win there, and he could see Cornell’s Max Dean in round two. Dean beat Foster 9-7 in the dual earlier this season. Winner of that likely sees Penn State’s Bo Nickal in the quarters.

Bowman went unseeded after securing eighth place in the conference tournament. He’ll get Missouri’s 15th-seeded Canten Marriott first round, which could also be a big team-race matchup. Winner there likely gets Ohio State’s Myles Martin.

Wilcke is seeded 14th, which puts him in the bottom half. He gets Nebraska’s Eric Schultz in round one. If Wilcke wins, he likely gets Virginia Tech’s Jared Haught, which could be vital to the team race.

Holschlag is also on the bottom side, and drew Missouri’s Willie Miklus, a former Southeast Polk standout, in round one. Miklus beat Holschlag 8-4 when the Panthers hosted Mizzou last month. The winner would be on track to potentially meet Haught or Wilcke in the quarterfinals Friday morning.

Stoll’s first-round draw is Antonio Pelusi of Franklin & Marshall (yes, that’s a real school). He could see Maryland’s Youssif Hemida, who he beat 8-1 in East Lansing, in round two, and could meet Duke’s Jacob Kasper in the quarterfinals.

All of the 2018 NCAA brackets can be found here.