Iowa started strong, then stumbled hard, on Day One of the NCAA Wrestling Championships.

CLEVELAND, Ohio — Thursday’s opening session of the 2018 NCAA Wrestling Championships made Iowa’s performance at the Big Ten Conference Tournament seem like a lifetime ago.

The Hawkeyes looked fantastic in Session One, winning nine of their first 10 matches to claim first place upon the first round’s completion. A combined 22 takedowns paved the way for six bonus-point wins, more than Iowa had during the whole tournament in East Lansing, Michigan, two weeks ago.

But consistency often prevails at the national tournament, and it was hard for many Hawkeye wrestlers to capture that in Session Two — during which Iowa tripped up plenty.

At Thursday’s end, the Hawkeyes sat third in the team race with 27 points, an encouraging development after the team’s lackluster performance in East Lansing. They trail only Ohio State (first, 36 points) and Penn State (second, 28.5), and are four points ahead of fourth-place Michigan.

But after a stellar first session, only three individuals advanced to the quarterfinal round — Spencer Lee (125), Michael Kemerer (157) and Alex Marinelli (165). Only Joey Gunther (174) was eliminated, meaning the remaining five will have to come through in the wrestlebacks.

“Overall takeaway from Day One — it’s a long tournament,” Iowa coach Tom Brands said. “It’s a three-day tournament, and we have Day Two coming up tomorrow.” 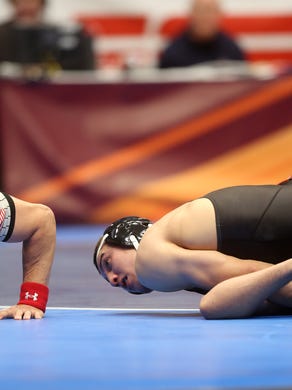 The primary hits came in the form of second-round losses by Brandon Sorensen and Sam Stoll. Sorensen, the two seed at 149 pounds, gave up a late takedown to lose to Lock Haven’s Ronald Perry, 3-2. Stoll, the five seed at heavyweight, allowed six third-period points and dropped a 7-2 decision to Maryland’s Youssif Hemida, an opponent he beat handily earlier this season.

“Stoll froze at the end,” Brands said. “I think the guy scared him when he picked him up and threw him out of bounds and ran through him. Quit wrestling in front headlocks. We need to do a better job there. He’s come a long ways in that position, but he kind of reverted back.

“Sorensen — you strategize against a guy, and we let him hang. He picked one and took us down. We were kind of off the whole time there, timing-wise, I thought, just kind of slapping at stuff. You have to be more physical to create openings.”

As such, Sorensen and Stoll will join Vince Turk (141), Mitch Bowman (184) and Cash Wilcke (197) in the wrestlebacks, where the Hawkeyes will need more wins and bonus points in order to stay in the thick of the trophy race.

The other teams Iowa is competing with for third — Michigan, N.C. State, Missouri, Oklahoma State and Lehigh — all have at least four wrestlers alive on the front side of their respective brackets. Ohio State has nine and Penn State has seven.

So Thursday was a good-but-could’ve-been-better day for the Hawkeyes. They put themselves in good position with a strong start, but, like Brands said, there’s still plenty of wrestling left to unfold. Session Three begins at 10 a.m., central time, on Friday. 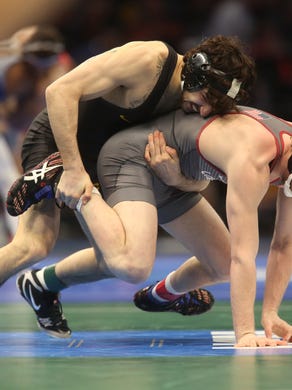 And, of course, consistency often prevails. Just ask Ohio State, which went 19-1 on Thursday to claim the top spot in the team race.

“We have to come back strong tomorrow,” Brands said. “This is a three-day tournament, and this is Day One. This is Session Two. We didn’t do real well. We have wrestling tomorrow, and we have to be ready to go tomorrow.”

True freshman Spencer Lee has produced many spectacular highlights during the 2017-18 season, so it should come as no surprise that he absolutely blitzed his competition en route to the quarterfinals at 125 pounds.

“I was ready to go,” Lee said. “This is the NCAA tournament, and if you’re not in the zone, you better make yourself get in the zone.

“We had lots to improve on from Big Tens. We’re just doing our best here to make a point, make a statement.”

Alex Marinelli and Michael Kemerer have an in-house competition, and the primary beneficiary has been Iowa’s team-score total.

Iowa’s 165-pound freshman has won both matches by fall at the NCAA Championships.

Marinelli and Kemerer combined for four pins on Thursday, both advancing to the quarterfinal round at their respective weights — Marinelli had two third-period falls at 165 pounds while Kemerer had a first-period pin and another in the second at 157.

“Kemerer and I feed off each other,” Marinelli said. “He gets a pin, then I want a pin. We’re roommates right now. We’re living together in the hotel. We’re shacking up. We’re wanting to top each other, and we both have two pins. That’s pretty cool.”

As a result, Marinelli and Kemerer have combined for 12 of Iowa’s team point total. Marinelli’s debut outing has him in the quarterfinals against Rider’s Chad Walsh, who’s seeded fourth at 165 (Marinelli is the five seed).

This is nothing new for Kemerer, however, who scored four major decisions and one technical fall in a third-place performance last season. This year, his two pins has him in the quarterfinals against Penn State’s Jason Nolf, the defending NCAA champion.

“That’s the most amount of team points I could’ve gotten, so it’s a successful day, and I have to move forward,” Kemerer said. “I know how good of a wrestler I am, and now I’m just executing.