The United States men's freestyle team dominated India and Japan on Saturday. A win over Georgia on Sunday will send them to the gold-medal match. David Taylor celebrates a win over India's Pawan Kumar in their match at 86 kg during the 2018 Wrestling World Cup in Iowa City on Saturday, April 7, 2018.(Photo: Bryon Houlgrave/The Register)Buy Photo

IOWA CITY, Ia. — The United States men’s freestyle wrestling team put on a show on Day One of the 2018 UWW Freestyle World Cup on Saturday here at Carver-Hawkeye Arena.

Team USA opened the competition with a dominant 10-0 victory over India, wherein the United States collectively outscored their opponents 87-7 — and that was with three non-starters wrestling. Seven wrestlers won by technical fall, and six won without allowing a single point.

In its afternoon competition, the United States overcame a 3-0 deficit to defeat a talented Japan squad 7-3. The effort was anchored by five consecutive technical falls from the back-half of the United States lineup.

“It’s just about going out and wrestling to the best of your ability,” Team USA coach Bill Zadick said. “Being active and being aggressive. They were looking for opportunities and were willing to take some chances to get after it.”

In all, the United States won 17 of 20 matches Saturday to go 2-0 in pool competition. Team USA wraps up the preliminary rounds with Georgia at 10 a.m. on Sunday. A win there would push Zadick’s squad into the gold-medal dual, set for 4 p.m.

If Sunday morning’s dual resembles anything like Team USA's Saturday performance, Zadick will undoubtedly be pleased. Statistically, the United States racked up 42 takedowns while allowing just 12 and recorded 18 exposure turns while on top.

Here’s how it all went down:

Gilman came out and got his hand raised, and the many Iowa fans inside Carver booed in response.

Colon, announced as a reserve for Team USA, got the nod in this first dual and did not disappoint. Tomar, a 2016 Olympian, led 4-0 after a second-period takedown, then Colon rattled off six-straight points to win, including a takedown-to-a-turn sequence to level the bout.

"I knew I had to get a takedown and a turn going into the second," Colon said. "I had to stay out of my left-hand underhook. I adjusted, got to my attacks and fakes, and it turned out to be a good change.

Workmanlike outing here from Stieber, one of the best turners in the country. He scored a third takedown to lead 6-2, then locked up a trap-arm gut wrench for three-straight turns to secure the technical superiority.

Green made easy work here, using a beautiful four-point takedown on the edge to take the early lead. He added a couple more takedowns off snap-downs and a couple of push-out points to end this one early into the second.

Workmanlike outing from Burroughs. Struck first on a low-single takedown in the second, then scored on a really nice takedown-to-a-leg-lace later on to build his lead. A step-out on a shot attempt ended it.

Team USA's Kyle Dake throws Sohsuke Takatani to the mat in their match at 79 kg during the 2018 Wrestling World Cup in Iowa City on Saturday, April 7, 2018. Bryon Houlgrave/The Register
Fullscreen

Clear Lake native Joe Colon gets Team USA off to a fast start with a 6-4 win over India's Sandeep Tomar in their match at 61 kg during the 2018 Wrestling World Cup in Iowa City on Saturday, April 7, 2018. Bryon Houlgrave/The Register
Fullscreen

Jordan Burroughs, left, shoves India's Vinod Kumar Omprakash off the mat to secure an 11-1 win in their match at 74 kg during the 2018 Wrestling World Cup in Iowa City on Saturday, April 7, 2018. Bryon Houlgrave/The Register
Fullscreen

India's Vinod Kumar Omprakash gets a face full of Jordan Burroughs' hands in their match at 74 kg during the 2018 Wrestling World Cup in Iowa City on Saturday, April 7, 2018. Bryon Houlgrave/The Register
Fullscreen

Aesop Lorenz, 14, of LaCross, Wisc., poses near the statue of Dan Gable outside of Carver Hawkeye Arena during the 2018 Wrestling World Cup in Iowa City on Saturday, April 7, 2018. Bryon Houlgrave/The Register
Fullscreen

David Taylor scores a takedown against India's Pawan Kumar in their match at 86 kg during the 2018 Wrestling World Cup in Iowa City on Saturday, April 7, 2018. Bryon Houlgrave/The Register
Fullscreen 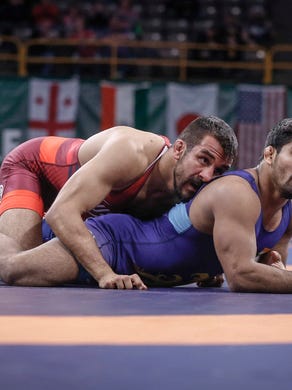 David Taylor celebrates a win over India's Pawan Kumar in their match at 86 kg during the 2018 Wrestling World Cup in Iowa City on Saturday, April 7, 2018. Bryon Houlgrave/The Register
Fullscreen

Team USA fans object to a call which resulted in Kendric Maple losing his match to Japan's Kazuya Koyanagi in their match at 61 kg during the 2018 Wrestling World Cup in Iowa City on Saturday, April 7, 2018. Bryon Houlgrave/The Register
Fullscreen

Team USA's Jordan Burroughs shoves Yuhi Fujinami out of bounds for a point in their match at 74 kg during the 2018 Wrestling World Cup in Iowa City on Saturday, April 7, 2018. Bryon Houlgrave/The Register
Fullscreen

Dake brought the fireworks, scoring a five-point takedown followed by a turn for an early 7-0 lead. He added another takedown and turn to end this match in just 37 seconds.

Another dominant performance here. Taylor struck early with a takedown, then added another and three-straight turns for the technical fall.

David Taylor, a two-time NCAA Champion at Penn State, discusses the crowd and Team USA after his first victory at the 2018 Wrestling World Cup. Hawk Central

Another reserve getting some run in this dual. Zillmer went takedown, turn for an early 4-0 lead. He added a push-out point before the end of the first, then scored another takedown in the second for the final score.

Easy work here for the three-time World and Olympic champion. Snyder scored a takedown in the first sandwiched between two push-out points, then added two more takedowns and a turn to complete the tech.

A third non-starter getting some mat time in the morning dual. Bradley, a former Missouri wrestler and a past Junior world champion, made easy work of Singh, scoring three-straight takedowns — including a feet-to-back four-pointer — and then added a turn for the win.

"This morning, after weigh-ins, they asked me if I wanted to wrestle," Bradley said. "I said, 'Sure, why not?' Honestly, I was training like I wasn't going to wrestle. I was lifting really hard Thursday morning. Then (coach Kevin Jackson) was, like, 'Hey, you might want to back off a little bit.'

"I was just really excited to represent the United States. Best feeling in the world."

Dom Bradley, a former Missouri star and past Junior world champion, discusses the Carver-Hawkeye Arena crowd after his win against India. Hawk Central

Lots of great action in this one. Gilman scored on passivity in the first period, then Takahashi had two excellent takedowns in the second off of re-shots. Much like their meeting in the world championship final last August, Gilman got to Takahashi’s legs, but just couldn’t finish.

“I feel like, tactically, it was a better match than at the world championships,” said Gilman, who lost to Takahashi, 6-0, in the 2017 world finals. “I’m not talking moral victories, but I’m talking improvement. Being positive. I’m talking a better match.

“I was maybe in that match maybe more so than at the world championships.”

Team USA's Thomas Gilman reflects on his 4-1 loss to Japan's Yuki Takahashi on Day One of the 2018 UWW Freestyle World Cup. Hawk Central

This match had a lot of action despite so few points. Koyanagi went ahead 1-0 after the first period, but Maple clawed to a 2-1 lead after two passivity points. Koyanagi leveled the bout after forcing Maple to step out. Maple nearly scored a takedown in the final seconds, but a challenge waived it off, giving Koyanagi the win by virtue of scoring last.

Otoguro came out on fire, scoring four quick takedowns with explosive offense and some really slick re-shots. Stieber, who had to get his head wrapped after he cut his head, scored a takedown of his own to be within 8-2 after the first period, but struggled finishing his shots throughout the match.

A fun match. Green put forth an excellent first period, scoring two takedowns, including an explosive four-pointer, for a 6-0 lead. Green then went up 8-2 after a roll-through sequence where both wrestlers scored. Kinoshita added a takedown on the edge, but Green hung on to put the United States on the board.

“I wanted to go out there and get the tech,” Green said, “but it didn’t happen.”

James Green, a two-time world medalist for Team USA, discusses what worked and what didn't on Saturday of the Wrestling World Cup. Hawk Central

In a battle of returning world medalists — Burroughs won gold, Fujinami won bronze — it was Burroughs who emerged victorious thanks to three takedowns, all of which came after Burroughs seemingly tweaked his knee. Even at 29, Burroughs remains one of the most explosive wrestlers on the planet.

“Just wrestled hard,” Burroughs said. “I think that if I just wrestle hard, I’m hard to keep up with. It’s difficult because there’s always a balance between discipline and aggression. Sometimes, I’m overzealous, and it’s too much action. I’m not being efficient. I’m not scoring.

“But I think that, within that battle, within that high frequency of attacks, this guy can never shoot. The best defense is a good offense. The more I shoot, the less chance he has to shoot. I wasn’t shooting early, he was doing all the shooting. The second period, I was going crazy on him, he had no chance to shoot, and a couple of them actually worked.”

Dake continued his explosive wrestling in this one, using two four-point throws in the second period to clinch a technical fall and tie this dual at 3-3.

“I knew that if he got in on a bad shot, I would be in a good place,” Dake said. “I was holding center, wrestling really well and capitalized on an opportunity. I knew his feet were coming up right away, and all of a sudden, I was, like, 'OK, I got him. Let's go.'

Kyle Dake went 2-0 for Team USA on Day One of the Wrestling World Cup on Saturday. Hawk Central

Taylor’s exceptional technique led to some nifty takedowns. It was tied 2-2 after the first period, but Taylor went takedown, turn, takedown, and then finished off Matsusaka with a four-point takedown midway through the second period.

Cox flashed his stellar turning ability here. After a takedown in the back half of the first period, the Mizzou grad locked up a gut wrench and recorded three turns for a 9-0 lead. Cox then scored eight seconds into the second period to secure the tech.

Five quick, efficient takedowns from Snyder clinched the dual here for the United States. Snyder hit a couple of sweet ankle picks, too. He was relentless. Sonoda had no answer.

The fifth-straight technical fall for the United States comes from big Gwiazdowski, who mixed pressure with pristine technique to roll up Arakida and seal another dual victory.