DeSanto was an NCAA qualifier for Drexel at 133 pounds this past season.

Iowa coach Tom Brands reacts after the Hawkeyes clinched third place in the team race at the NCAA Wrestling Championships. 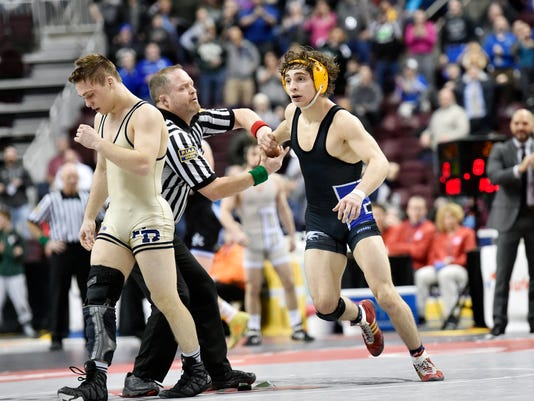 Exeter Township's Austin Desanto, right, starts to run off the mat before having his hand raised by the referee after defeating Franklin Regional's Spencer Lee, left, in the championship 126-pound bout in the PIAA Class 3A wrestling championships Saturday, March 11, 2017, at the Giant Center. The bout was Lee's first defeat in his high school career, during which he'd won three state titles.(Photo: Chris Dunn, York Daily Record)

Austin DeSanto announced Sunday that he would join the Hawkeye wrestling team. DeSanto, who is eligible to wrestle immediately, went 30-7 overall and was an NCAA qualifier for Drexel as a true freshman this past season at 133 pounds. He has three eligible years remaining.

DeSanto's transfer, which first reported by Trackwrestling, gives Iowa an All-American candidate at 133, which was the only weight the Hawkeyes didn't qualify for the 2018 NCAA Championships, where they placed third as a team with five All-Americans. DeSanto came within one victory of becoming an All-American himself, reaching the quarterfinals before losing twice in a row.

DeSanto brings with him a high-paced style of wrestling that led to him being considered one of the most exciting young wrestlers in the country this past season. Of his 30 victories this past season, 11 came by technical fall.

But DeSanto also brings with him some unfavorable baggage. He fell out of favor after losing to Michigan's Stevan Micic in the quarterfinals of the NCAA tournament, wherein he tried an illegal armbar at the end of a 13-1 major decision. He then lost to Rutgers' Scott Delvecchio on the consolation side, ending his tournament run.

Shortly after the season ended, Drexel announced DeSanto's intent to transfer and gave him a full release. He was reportedly seeking a tougher room, according to his high school coach, Jonathan Rugg, and immediately considered Iowa, Rutgers and Penn State.

Iowa was quick to jump into DeSanto's recruitment. He visited Iowa City during the 2018 UWW Freestyle World Cup, and sat with Spencer Lee, Iowa's true freshman national champion at 125 pounds this past season, throughout the weekend. He was captivated by the crowd inside Carver-Hawkeye Arena and their lust for the sport.

“The fans were really cool," DeSanto told Trackwrestling. "They didn’t let Spencer walk five steps without someone wanting an autograph or a picture."

Lee and DeSanto have history, of course. DeSanto, a standout prep wrestler at Exeter High School in Pennsylvania prior to competing at Drexel, actually beat Lee in the 2017 state finals at 126 pounds when both were seniors. DeSanto emerged victorious, 6-5, though it should be noted that the match came not long after Lee tore his ACL.

Now, the two will be training partners, giving Iowa a formidable one-two punch at the top of the lineup. DeSanto said Lee, as well as the Hawkeyes' history of producing stout lightweight wrestlers, was the ultimate deciding factor in his decision.

“I thought about it for a while,” DeSanto told Trackwrestling. “This whole week, I thought about what I’m about and this opportunity and what I want to do with them and how hard they wrestle and how hard they train — that’s what I’m about. That’s what I want to become, and I think they can get me to the point where I can become a national champ. That’s why I chose them.

“In my mind, it’s awesome because I get a really, really good training partner to work with and so many other training partners who are going to make me better. They have a lot of lightweight workout partners. It’s going to be awesome.”

Iowa fans probably think so, too.