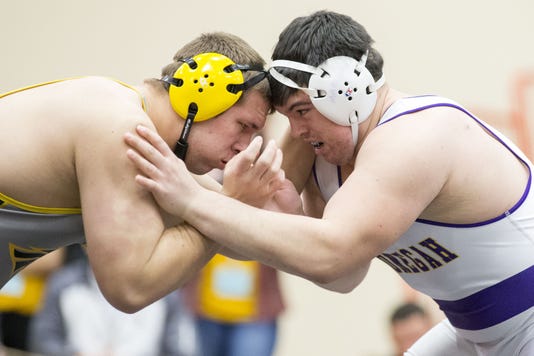 Hononegah's Anthony Cassioppi and Bobby Papiernik of Naperville tie up in the 285-pound championship bout Friday, Dec. 23, 2016, during the second day of the Al Dvorak Memorial Wrestling Tournament at Harlem High School in Machesney Park.(Photo: Max Gersh, RRSTAR.COM & THE JOURNAL-STANDARD / Special to the Register)

When he was 9, Cassioppi was at a youth football practice when Marty Kaiser, the legendary former wrestling coach at Hononegah high school in Illinois, stopped by. He did this regularly to try and recruit football players to the wrestling mats in the winter.

Kaiser discussed the benefits of doing both sports and how closely they were intertwined — foot speed, hand placement, learning to take the person across from you, push them backwards and take them to the ground. Cassioppi was intrigued.

“I was like, sure, I’ll try it,” Cassioppi says now. “That’s why I started wrestling, to get better at football.”

Nearly a decade later, Cassioppi looks back on that meeting and laughs. He has grown into an physical specimen — at 6-foot tall and 260 pounds — with a good frame for college coaches seeking interior reinforcements on an offensive or defensive line.

Except, well, Cassioppi no longer plays football. The Illinois native is one of the nation’s brightest young wrestling prospects and he is bringing his talents to Iowa City, beginning this fall, when he officially joins the Iowa wrestling program.

“I really like Iowa City,” Cassioppi told the Register last week. “The coaches, the wrestlers — they all have the same goal, to be the best. They’re great people. I’m really excited.

“The guys in the room now — Spencer Lee, Alex Marinelli, Michael Kemerer — they’re a different style than the previous Iowa guys. They’re gaining a lot of attention, and the team is just getting better.”

In Cassioppi, the Hawkeyes are getting an accomplished workhorse. He graduated Hononegah as a two-time state champion, winning his final 94 high school matches, all by either pin or technical fall. He was the considered the nation's fourth-best heavyweight wrestler of the 2018 senior class.

Even more, just two weeks ago, Cassioppi won the coveted Junior Triple Crown — that is, winning individual national titles in all three wrestling disciplines (folkstyle, freestyle and greco) in the same year — for the second consecutive year. Only one other has won back-to-back Junior Triple Crowns: Adam Coon, a recent Michigan grad who was a three-time NCAA All-American.

“That’s great,” said Cassioppi, who dominated his way to both of his titles, going 11-0 with three pins, seven technical falls and allowing just five total points over the course of six days.

“That was the goal when I won it last year, to go out and repeat.” 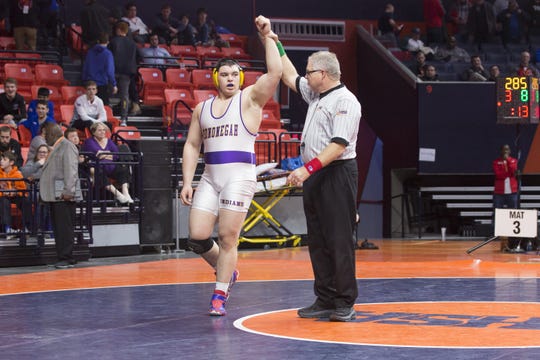 Hononegah senior Anthony Cassioppi wins the 285-pound class of the IHSA Class 3A State Championship on Saturday, Feb. 17, 2018, at the State Farm Center at the University of Illinois in Champaign. (Photo: Scott P. Yates, RRSTAR.COM & THE JOURNAL-STANDARD / Special to the Register)

All of this may not have been without that meeting with Kaiser nearly a decade ago. Back then, Cassioppi was all-in on football. He would grow up to be pretty good at that, too. At Hononegah, he was a two-year varsity starter on both the offensive and defensive lines.

But wrestling captured his attention in ways football did not. Cassioppi was drawn to the mat because pressure it put on him as an individual. If he lost, he had only himself to blame. Plus, he could still take the person across from him, push them backwards and take them to the ground.

“I just loved that,” Cassioppi said. “It’s hard playing football or baseball or other team sports. You, individually, might have a great day, but your team may still lose. That’s tough. Wrestling is still a team sport, don’t get me wrong, but I just love how individual it is.”

It did not take long for Cassioppi to throw himself completely into the sport. He trained with Lee Kemp, a three-time NCAA champ at Wisconsin who won three world freestyle titles. He also worked with Bryan Medlin, who was twice named the National Greco-Roman Coach of the Year.

All of it accelerated Cassioppi’s development. He went from splitting the varsity spot with another wrestler as a freshman to taking third in the state as a sophomore. The following summer, he was a double All-American at the Cadet freestyle and greco national championships.

“That summer was the first time someone preached to me the importance of good position, just a lot more than I had ever heard before,” Cassioppi said. “That made a huge difference in my wrestling.”

The rest, of course, is history. In addition to his two state crowns and countless national titles, he won gold in both freestyle and greco at the 2017 Junior Pan-American Championships. He finished third at the Junior freestyle world team trials in May, and was a runner-up for the Junior Greco world team a month later.

In short, there are high expectations for Cassioppi. He plans to redshirt this coming season and presumably take over the starting heavyweight spot once senior-to-be Sam Stoll graduates. He is welcoming the pressure, so much that he’s positioning himself as best he can to succeed.

That means rooming with Spencer Lee, Iowa’s true freshman national champion this past season, this upcoming year. Yes, Cassioppi is forgoing the dorm experience to room with the pajama pants-wearing, competitive Pokémon-loving face of the Hawkeye wrestling program.

Turns out, Cassioppi and Lee may get along swimmingly. He, too, is privy to Nintendo’s second-most popular video game franchise. He said the Pokémon theme — the same one Lee ran out to at the NCAA Championships last March — was his walk-out song during his sophomore season.

More than anything, Cassioppi is excited about the opportunity to surround himself with more great wrestling minds. He hopes to mine Lee’s wisdom and adopt it as his own, which he hopes translates into more championships, both individually and for the team.

“He’s a competitor,” Cassioppi said. “He has to be the best, and I’m super excited.”