“The biggest thing for me was their style of wrestling really fits my style.” 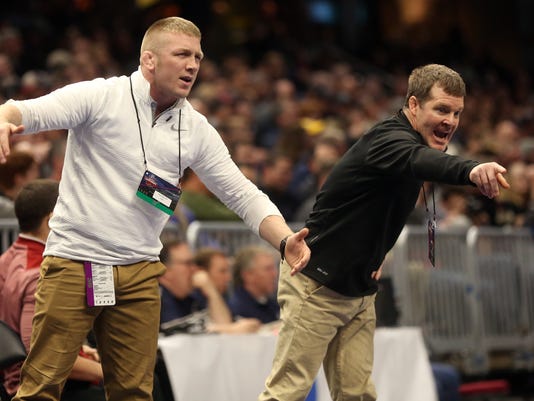 The Iowa wrestling program continued its hot summer on the recruiting trail on Monday.

Abe Assad, a senior at Glenbard North in Illinois, announced his commitment to the Hawkeyes on Monday evening. He is considered the top-ranked 182-pounder in the country, according to Flowrestling, and projects as a 184-pounder.

“The biggest thing for me was their style of wrestling really fits my style,” Assad told HawkCentral.com. “Hand fighting and just great wrestling — that’s what I like. Iowa is the best in the country at doing that. They win matches doing that.”

Assad is Iowa’s second 2019 commitment, joining Minnesota prep standout Zach Glazier, who committed in late June. Additionally, 2020 recruit Patrick Kennedy and 2018 prospect Aaron Cashman both announced their commitments to Iowa this summer, and both Austin DeSanto and Jason Renteria transferred in after the conclusion of the 2017-18 season.

In Assad, the Hawkeyes are getting a world-class competitor on the rise. He is considered the No. 13 pound-for-pound prospect in the 2019 class. He went 51-0 and won his first state title in February, then caught fire at the Cadet World Team Trials in Akron in June, winning both the freestyle and Greco-Roman world team spots at 80 kilograms (roughly 176 pounds).

Assad competed in freestyle at the Cadet World Championships in Croatia in early July. He went 4-1 and won bronze, helping Team USA to a second-place team finish. He lost to Iran’s Mohammadreza Ghiyasi, an eventual finalist, in the second round, then won three straight to take third.

Many people have supported me along the way, and I’m excited to share that I’ll be staying in the black & gold. I’ve decided to peruse my academic and athletic goals at the University of Iowa. Thank you to my coaches, family, and friends for their support. #GoHawks#RTFU#GDNpic.twitter.com/jXSby9H0YC

Prior to the world championships was when Iowa first made contact. Assad originally committed to Army after taking second in freestyle and first in Greco at the 2017 Cadet national championships. He decommitted after his run at the trials in June, and coaches from all over the country blew up his phone.

“(Iowa) reached out to me a week or two before Cadet worlds,” Assad said. “I was training, so I think (assistant coach Ryan Morningstar) shot me a text or called me to tell me they were interested.

“But what I liked about them — they told me they didn’t want to recruit me right away. They wanted to let me train. I was going to compete at the world championships, so they just let me be for a little bit. Other coaches were calling me left and right while I was training for a world championship. I liked that about Iowa. They understood that I needed to train.”

Assad won bronze, then returned to more suitors. He narrowed his list to North Carolina, Michigan, Ohio State and Iowa. He made a visit to Iowa City the final weekend of July, where Morningstar and head coach Tom Brands showed him the campus and wrestling facilities.

He was hooked — although not at first.

“I’m not going to lie, when I first went to see Iowa and they talked to me, I was a little intimidated by the Brands brothers,” Assad said and laughed. “They’re crazy on the mat, you know? But when I went to visit, I found that they’re really awesome guys.

“They’re funny. They know how to joke around, but they know how to get serious, too, when it really counts. That was a relief when I got to meet them and get to know them.”

What really sold Assad, though, was a trip to the Hillcrest dorm on the west side of campus.

That day, Assad, his parents and Brands took a stroll through the dormitory. Upon their arrival, Assad said a campus maintenance worker spotted them and approached.

“This is a janitor working at the school, and he knew who I was. I didn’t really announce it anywhere on social media that I was there. He just knew me. That showed me how strong and powerful the fan base is.

“Being a wrestler at Iowa is like being a football player at Alabama. It’s awesome.”

Bronze at the World Championships! Thank you to everyone who helped me get here. #USA

Assad had hoped to take other visits to his listed schools, but he was smitten with Iowa. He was enthralled by the idea of working out with Glazier and Kennedy, as well as current Hawkeye wrestlers Cash Wilcke and Jacob Warner.

All of it was enough for Assad to announce his decision on Monday night. He took out his phone, penned a quick message of thanks and posted it.

“I visited and saw the campus, and was pretty much sold right then and there,” Assad said. “I didn’t want to commit right on the spot because I was still thinking about a bunch of other schools.

“But I went on campus and saw how amazing the campus was, and how they’re building a new wrestling room soon — I mean, you just can’t beat that.”