Jacob Warner ready for official Iowa wrestling debut — whenever that is

For the first time, Warner is on Iowa's probable lineup. But that doesn't mean he'll wrestle Saturday against Purdue. Tom Brands explains.

Jacob Warner ready for official Iowa wrestling debut — whenever that is 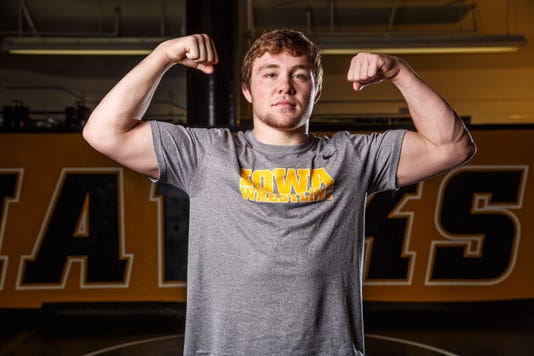 At some point this season, highly anticipated freshman Jacob Warner will be "the guy" in Iowa's starting lineup at 197 pounds.(Photo: Zach Boyden-Holmes/The Register)Buy Photo

“We’re going to do the right thing by our individuals every time,” Brands said this week. “And not every program can say that.”

That’s the backdrop for Brands' cagey words about whether highly anticipated redshirt freshman Jacob Warner will make his varsity debut in Saturday’s noon dual against Purdue at Carver-Hawkeye Arena. For the first time, Warner is listed in Iowa's probable lineup — as an “or” with freshman Connor Corbin at 197 pounds.

So, is that an indication that Warner — whose last competition was at the junior world championships in September — gets the call?

"I’m being maybe a funny guy up here and holding my cards tight to the chest," Brands said. “I mean, yeah he’s going. Does that help you? Or no, he’s not going. I don’t know. He’s ready. I know he’s ready. Is it the right thing for him?"

And there you have it.

We’ll see. If it’s not the right thing for Warner this week (Purdue has the No. 12-ranked 197-pounder in Christian Brunner), maybe it’s next week against Iowa State (Willie Miklus is ranked No. 5). Or maybe it's not until later yet.

Warner hears from friends all the time, asking him, "When are you going to wrestle?" He keeps telling them the same thing: "I don't know."

He and Brands sat down after the world championships and discussed a transition plan. The one thing they didn’t discuss: Which specific dual would mark Warner's debut.

“That was never set in stone,” Warner said. “It’s whenever I feel ready, it’s whenever he feels ready. I’m ready. I know he thinks I’m ready. It’s just a matter of time.”

Brands also is being careful with bringing back 174-pounder Michael Kemerer and top-ranked heavyweight Sam Stoll from injuries; neither will wrestle against Purdue. Freshmen Myles Wilson and Aaron Costello have done a nice job holding the lineup spots for both all-Americans.

“Just be patient. You’ll see what you came to see, but it might be the next time,” Brands said. “Enjoy these (other) guys, because they’re going to do a good job.”

With Warner, Brands deserves deference with how he manages a highly talented freshman. He and Terry Brands handled the Spencer Lee situation to perfection last season — when they unleashed the true freshman into the varsity lineup after the Midlands Championships, then gradually built toward an NCAA Championships run in March.

Lee peaked at the finish, of course, with a stirring, dominant charge to the 125-pound title.

Whether Warner (ranked No. 8 by TrackWrestling at 197) can make a similar run is months from being known.

But that’s the goal. And the thinking.

Iowa wrestlers are ultimately judged by how they do at this year’s NCAA Championships in Pittsburgh, not in the Purdue dual.

Brands and Warner are in lock-step with their approach.