Iowa State is wrestling well early. Iowa may not be at full strength. That combination makes Saturday's Cy-Hawk dual all the more intriguing. 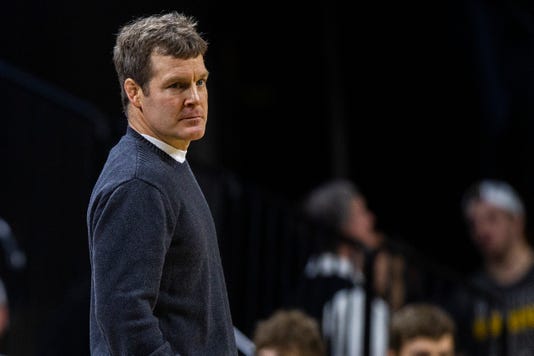 It’s no secret that the Iowa and Iowa State wrestling programs are in different places right now.

The Hawkeyes, with a 4-0 record and ranked No. 3 nationally by Trackwrestling, are chasing NCAA tournament trophies. They’ve won one in 11 of the last 12 years, including last season’s third-place finish, and are very much in the hunt for another this season.

The Cyclones, at No. 25 and 1-0, are trending upward. After a rocky first season at the helm, coach Kevin Dresser has laid a solid foundation in Ames, which will help Iowa State jump back into national relevance much sooner than many expect.

“It’s a great opponent that you have to get ready for,” Iowa coach Tom Brands said this week. “I know what they’re trying to do in Ames, Iowa. I also know what we’re doing upstairs in our wrestling room.

Recently, the annual Cy-Hawk dual hasn’t been all that competitive. The Hawkeyes have won 14 in a row — and, really, 29 of the last 30. The Dan Gable Traveling Trophy hasn’t traveled since its inception in 2010. In the last six dual meets between the two programs, Iowa’s won 48 of 59 contested matches. Only twice in that span have the Cyclones won more than two matches.

Come Saturday, the two will meet again — the dual is scheduled 2 p.m. at Carver-Hawkeye Arena in Iowa City — and, really, you can probably throw all of that out the window.

Iowa enters with a slight limp. Michael Kemerer, a two-time All-American, is done for the year after Brands announced that his star junior would undergo surgery earlier this week. Even more, the Hawkeyes fielded an abbreviated lineup last weekend against Purdue, featuring five backups. They still won, 26-9, but Brands hinted that a variation of the lineup will be used going forward.

The Cyclones, meanwhile, are riding high. They’ve only wrestled one dual this year, a 37-3 win over Southern Illinois of Edwardsville, but have performed well in various tournaments. Four individuals are nationally ranked at their respective weights, and a handful more may join them as the season progresses.

“More than anything for us, I think it’s a measuring stick to see where this team is,” Dresser said. “Regardless of who they put out there, when you have a great program like that, their second guy may not be as good as their first guy but their second guy is still pretty darn good.

“We think we can compete. We’re going to get tested at every weight, and it’ll be fun to see. We’re not going there to concede. When we step in a gym, we’re going in to win. It’s not different this weekend.”

Intriguing matchups are littered throughout the probable lineups released by both teams earlier this week.

Should Jacob Warner finally make his Hawkeye debut, he’ll face Willie Miklus, a three-time All-American from Mizzou who transferred to Iowa State in the offseason. Warner beat Miklus last season, which only added to the heavy expectations for the redshirt freshman.

At 141, Iowa’s Max Murin has looked very good en route to a 4-0 start, and he’ll likely get Ian Parker, who made waves while healthy last season after bumping up a weight following Kanen Storr’s departure.

There are more: Myles Wilson, Kemerer’s short-term replacement, will get Iowa State’s Marcus Coleman, who’s ranked No. 21 nationally at 174 pounds. Wilson beat Coleman back in high school. Iowa’s Carter Happel, who filled in for Pat Lugo last week at 149 pounds, could face Jarrett Degen, who reached the bloodround last year at nationals.

The most interesting bout might very well be at 133 pounds, Iowa’s Austin DeSanto will face Iowa State’s Austin Gomez in an interesting clash of styles. DeSanto is a returning NCAA quarterfinalist. Gomez made the Junior World Team this past summer. Both guys figure to compete in a wildly deep weight class nationally.

“I know he’s tough, so it’s going to be fun to go out there and scrap,” DeSanto said. “It’s going to be a cool experience — in front of that crowd, too. It’s going to be cool. I get up for this match because it’s another time I get to step on the mat and prove that I’m getting better.”

Austin DeSanto transferred to Iowa from Drexel in the offseason, but understands the importance of the Cy-Hawk rivalry. Hawk Central

When both teams are fully healthy, Iowa is undeniably the favorite on paper. But all indications say the Hawkeyes may not have their best lineup on Saturday. Kemerer is done. Sam Stoll, the nation’s top-ranked heavyweight, isn’t slated to compete. Lugo, Warner and Spencer Lee, Iowa’s returning national champion at 125 pounds, all didn’t go last week against Purdue.

That makes Saturday’s dual all the more compelling. The Hawkeyes should still be considered the favorites simply because of the firepower they possess. But if Brands trots out the same lineup that faced the Boilermakers, things could get very interesting.

“We’re getting ready for a match on Saturday against an in-state rival that wants to come in here and take something from us,” Brands said. "They want a piece of this real estate. So we have to be ready at 10 weight classes.

“I know that we have to work on our team to get our team ready to go. The focus is on seven minutes hard, and we have the guys that march to that, and when they march to that, they’re pretty doggone good.”

WHERE: Carver-Hawkeye Arena, Iowa City
WHEN: 2 p.m., Saturday
WATCH: Flowrestling and BTN Plus ($)
LISTEN: AM 800 KXIC