‘He leads with his face’: Iowa’s Max Murin looks to continue solid start against Minnesota

"He’s the kind of guy that’ll fight in any position for as long as he can. There’s not a position where he quits."

‘He leads with his face’: Iowa’s Max Murin looks to continue solid start against Minnesota

Iowa redshirt freshman Max Murin recaps his 2018-19 season to this point, and also discusses how he created a chess club in high school. Hawk Central

That strategy has led to some ... interesting results during Murin’s first two years with the Hawkeyes.

As a redshirt last year, Murin went 16-3 and took fifth at the 2017 Midlands Championships. At a practice afterward, he collided with Nick Dardanes, a member of the Hawkeye Wrestling Club. Murin suffered a broken eye socket, broken jaw and a concussion.

This year, Murin’s tactics have led to much better results. The Ebensburg, Pennsylvania, native currently boasts a 9-2 record for the No. 3-ranked Hawkeyes. Entering this Sunday’s Big Ten Conference dual at No. 5 Minnesota, he is slotted 13th nationally at 141 pounds, according to Trackwrestling 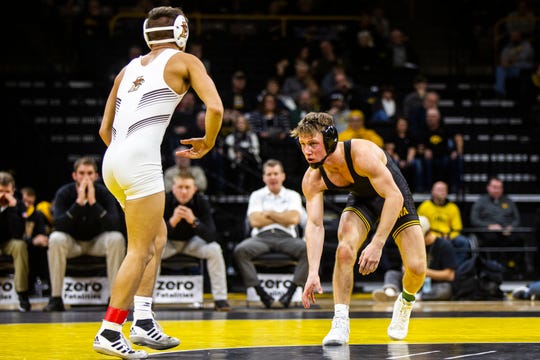 Iowa's Max Murin is 9-2 and ranked No. 13 nationally at 141 pounds this season. The redshirt freshman has a big match coming up against Minnesota's Mitch McKee this Sunday when the Hawkeyes wrestle at Minnesota. (Photo: Joseph Cress/Iowa City Press-Citizen)

“I’ve been wrestling solid,” Murin said this week. “There’s obviously room for improvement. I didn’t want to take those two losses. I just need to score earlier and keep scoring.”

Murin came to Iowa as part of the Hawkeyes’ decorated 2017 recruiting class. He was a two-time Pennsylvania state champion at Central Cambria and a Junior freestyle All-American. At media day in November, Brands said he almost wrestled Murin last season as a true freshman.

The face injury took that idea off the table, but he refused to change his wrestling style. Last April, Murin returned and took second at the UWW Junior freestyle national championships. A month later, he came up short at the world team trials, but his performances foreshadowed what was coming this season.

“He’s just physical and mean,” said Spencer Lee, Iowa’s sophomore 125-pounder and reigning NCAA title-winner. “He’s the kind of guy that’ll fight in any position for as long as he can. There’s not a position where he quits. If you take him down, he’s back up and in your face again.

“As an opponent, that’s annoying. As a wrestler, I can understand how they could feel. He’s always in your face, the whole time.” 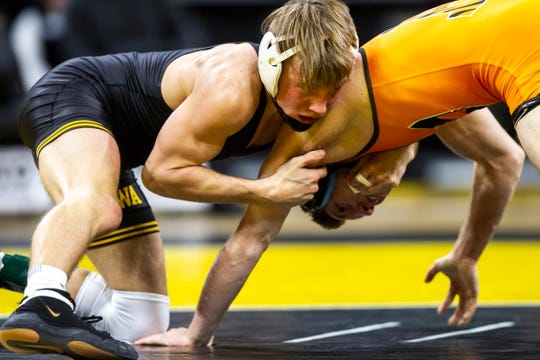 Iowa's Max Murin is 9-2 and ranked No. 13 nationally at 141 pounds this season. The redshirt freshman has a big match coming up against Minnesota's Mitch McKee this Sunday when the Hawkeyes wrestle at Minnesota. (Photo: Joseph Cress/Iowa City Press-Citizen)

“He wrestles matches hard,” said Brands, now in his 13th season as the Iowa wrestling coach. “He’s very hard-nosed. We have to get him better, to the point where we don’t have to wait until the second period to get our motor running.

During the first half of the season, Murin scored 28 total takedowns in his nine matches, including 11 in the first period (eight in the second and nine in the third, for those wondering). But he’s also wrestled five matches without scoring a first-period takedown, including three times at the Midlands two weeks ago. He is 3-2 in those matches.

“It doesn’t have to be so strategic in the first three minutes,” Brands continued. “Just let it fly. Positioning is important, and he’s getting better there as well.”

That’ll be important against Minnesota this Sunday.

The Gophers (8-1 overall, 1-0 Big Ten) boast a formidable string of lightweights that includes three All-Americans and two other NCAA qualifiers. In the case of Murin, an opportunity is there when he shakes hands with Minnesota’s Mitch McKee.

McKee is 10-1 this season and is ranked No. 5 nationally by Trackwrestling. He has five pins, all coming in the first period. He’s twice qualified for the NCAA championships, and, in 2017, finished second at the Junior freestyle worlds.

“I’m really excited,” Murin said. “It’s a really big opportunity for me. I just need to get to my offense early and often and just keep scoring.”

Iowa (6-0, 1-0) owns the all-time series against Minnesota — 74-28-1 — and has beaten the Gophers four straight times. But Sunday’s dual as the potential to be interesting. Each of the first five weights, all of which are expected to feature all-ranked matchups.