"This is one of those things that should be on live, primetime ESPN."

IOWA CITY, Ia. — Tom Brands settled into his weekly meeting with reporters on Tuesday and talked about many things — his wrestlers, their preparation and how, even as his team is ranked No. 5 in the country, they’re looking for a “breakthrough.”

When the Iowa wrestling coach addressed Sunday’s 2 p.m. dual against No. 3 Oklahoma State, he did not hold back when talking about what makes this rivalry so special.

“You know what? That’s exciting. This is one of those things that should be on live, primetime ESPN … Not the deuce. Not the trey. Not the four. Not the five. Not the ocho, from that movie. Put us on ESPN.”

The Hawkeyes and Cowboys will have to settle for Flowrestling’s afternoon live stream, but the action itself will capture the attention of wrestling observers across the country.

These two programs have combined to win more NCAA team championships (57 — Cowboys 34, Iowa 23) than the number of times they've faced off (this will be No. 53), but neither has won since the Hawkeyes’ title in 2010. It'll be the 24th meeting at Gallagher-Iba Arena in Stillwater.

As such, this matchup is something of a barometer for both teams. Top-ranked Penn State, winners of seven of the past eight national team crowns, is considered the far-and-away favorite to win again this season. But Sunday’s dual could serve as a coming-out party for the winner.

“This is an opportunity,” Brands said. “We’ve got two programs going after the same real estate. You could say that we’re chasing Penn State, and that’s probably a fact, but I don’t think anybody is conceding anything.”

► MORE WRESTLING FROM THE REGISTER

Both teams enter with identical 14-0 records and boast a couple of college wrestling’s best lineups. According to Trackwrestling, as many as 19 ranked wrestlers could take the mat on Sunday, including eight in the top five at their respective weights. As many as six bouts could feature wrestlers ranked in the top 10.

That’s the “high octane” Brands was referring to, and why he wants this dual to gather as many eyeballs as possible. Regardless of the viewing situation, there’s a chance this could go down as another stellar chapter in the Iowa-Oklahoma State wrestling rivalry.

“There’s been some crazy dual meets,” Oklahoma State coach John Smith told the Register this week. “The matches you think you have a 100-percent chance of winning, we’ve lost those and we’ve won those. It’s unpredictable. 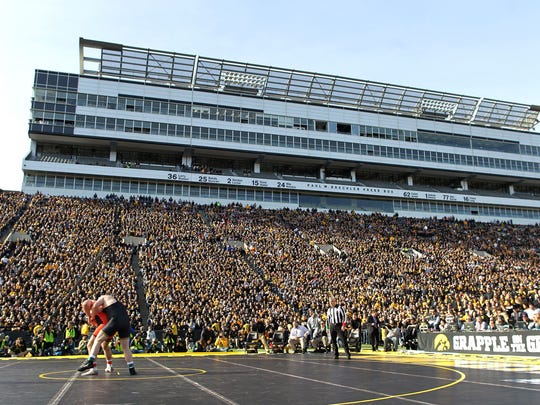 Both coaches have had their moments in the rivalry. Smith was an 18-year-old true freshman in 1984 when he scored a takedown with eight seconds left to beat Mark Trizzino 6-5 in a 24-6 Cowboy victory. Brands beat Oklahoma State’s Alan Fried in the NCAA finals in both 1991-92.

Since Brands assumed the head-coaching role at Iowa, the series is dead even (6-6-1). But the Hawkeyes have won four of the past five meetings. He and Smith both said this week that there’s a mutual respect between the programs. That feeling extends to the athletes as well, who are excited for Sunday’s matchup.

“It definitely gets your blood pumping,” Iowa’s Kaleb Young said.

“Two undefeated teams going at it, and one is going to leave with a loss,” Lee added. “We’re going to do our best to not be the ones with a loss.”

“We love the fight,” Marinelli continued. “... And Oklahoma State is going to be a dogfight.”

The Cowboys are going all out for this one. They’re attempting to break an in-season attendance record. The mat will be elevated. Smith told local media earlier this week that they’re hoping to replicate Saturday night at the NCAA Championships.

That tournament is now less than 30 days away. Sunday’s dual, the last of the regular season for both teams, could go a long way toward building postseason momentum.

No. 5 Iowa wrestling at No. 3 Oklahoma State