Rathjen picked the Hawkeyes over Iowa State, North Carolina and Purdue, among others.

Ankeny's Caleb Rathjen, one of the nation's most sought-after wrestling prospects, made his college decision this week — and he's staying in-state.

Rathjen informed the Register on Thursday night that he has committed to the Iowa wrestling program. He chose the Hawkeyes over Iowa State, North Carolina and Purdue, among others. He projects as a 157-pounder at the next level.

"I grew up a big Hawkeye fan," Rathjen said. "I've been around it. Went to meets growing up. Loved (Carver-Hawkeye Arena), loved the atmosphere. My visit was awesome. Loved the feel.

"I just thought that's where I fit in the best. It felt right."

I’m very proud and excited to announce my commitment to further my academic and wrestling career at the University of Iowa. I want to thank all of my amazing family, friends and coaches who have helped support me. I can’t wait to wear the Black and Gold! Go Hawks! pic.twitter.com/luHnx0PGbf

Rathjen — pronounced rah-chee — is one of the nation's best. He's ranked No. 14 nationally at 132 pounds and is considered the No. 29 overall prospect in the 2021 class, both according to MatScout.

Wrestling fans in Iowa know of Rathjen's credentials. He's a two-time Class 3A state finalist, taking second in 2018 at 113 pounds and winning last season at 126. He was an Iowa Eight selection and an All-Iowa Elite pick in 2018-19, too, and carries a 61-3 overall record into his junior season with Ankeny. 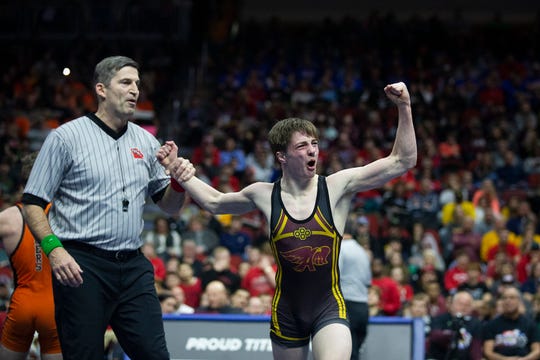 As such, many Division I programs hoped to land Rathjen's services. A number of schools reached out quickly, including all three in-state schools as well as North Carolina, Purdue, Stanford, Virginia and South Dakota State. Each offered reasons for why Rathjen's addition would help elevate their respective programs.

In the end, the Hawkeyes won out. The Rathjen family has always been Iowa fans, something that Rathjen mentioned to the Register early in his recruiting process might play a small factor in his decision. The idea of donning the all-black singlet was too good to pass up, leading to him to pull the trigger on Thursday.

"They were hard to beat," Rathjen said.

With Rathjen's commitment, Iowa continues to beef up its 2021 recruiting class. He is the third wrestler to verbal, joining Missouri star Wyatt Henson and Colorado prep Cam Lucero. Henson is considered the No. 16 overall 2021 prospect by MatScout, and Lucero is a 2019 state champion.

Rathjen, who plans on wrestling 138 this year for Ankeny, said he loves all the excitement surrounding the program, and can't wait for his chance to contribute.

"It's awesome," he said. "It's the perfect time to jump on the train. Couldn't have picked a better time.

"The future is bright for Hawkeye wrestling."