“I’m not going there for second,” Abe Assad said. “I’m going there to wrestle hard every match and win the tournament.”

IOWA CITY, Ia. — Abe Assad joined the Iowa wrestling program out of Glenbard North High School, about an hour from Welsh-Ryan Arena at Northwestern University. A few years ago, Assad and his dad made the 40-mile trek to watch the Midlands Championships.

Back then, a young Assad brought an Iowa hat along for the ride, and at the conclusion of the finals session, he actually got it signed by former Hawkeye star Brent Metcalf. Head coach Tom Brands and associate head coach Terry Brands signed it, too.

“I think I still have it, actually,” Assad said last week. “They probably don’t remember, but I do. That was fun.”

This week, Assad will return to the Midlands, this time at Sears Centre Arena in Hoffman Estates, Illinois. This time, he’s a competitor, a true freshman for the Iowa wrestling program.

This time, he didn’t come to watch and ask for autographs. He came to wrestle in Monday’s finals session. 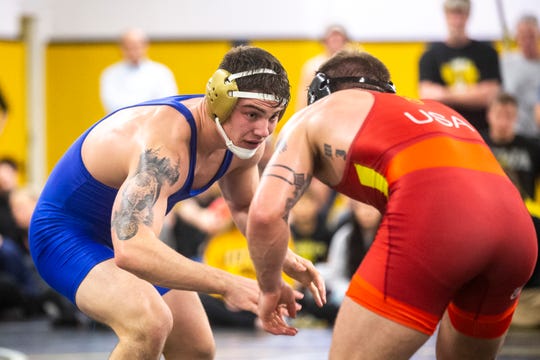 There are many intriguing subplots to follow at the 57th Ken Kraft Midlands Championships, which runs Sunday and Monday. The field is expected to feature at least nine teams from Trackwrestling’s latest top-25 poll, including No. 1 Iowa, No. 13 Northern Iowa and even NAIA superpower Grand View. Individual matchups and team positioning are all on the line.

In the case of the top-ranked Hawkeyes, it will be the first opportunity to see them in a tournament setting this season. Brands hopes to solve some lineup spots — 141 and 184 pounds — and to see his team dominate. Iowa has won 28 Midlands team titles. If this year’s team is truly a national title contender, it should win another team crown by a wide margin.

“It’s a good barometer for everybody,” Brands said. “It’s a barometer for my evaluation perspective, as well, because if our guys are throwing their hat in the ring just to see where they’re at, then we need to work on their mentality.

“This is about being the best that you can be, one match at a time.”

Another fun reason to follow the Midlands is that it operates like an open tournament, meaning anybody can enter and compete. Iowa has routinely used it as a proving ground, of sorts, for its true freshmen.

Enter Assad, perhaps the most well-known of the Hawkeyes’ small-but-talented true freshmen class.

The Carol Stream native joined Iowa as a ballyhooed recruit, the No. 29 overall prospect in the 2019 class. He won two state titles for Glenbard North, a bronze medal at the Cadet freestyle world championships and a Junior men’s freestyle national championship last July.

“A guy there with a lot of talent,” Brands said. “His upside is huge. We want him to continue to get more college-oriented in this room. When you come from a high school program and you’re the alpha male, sometimes it’s hard to look at it like it’s nothing but survival.

“But it’s not survival. We want to persevere and overcome and rise to the occasion in these challenges, no matter who our opponent is in this practice room — and there’s some tough practice partners in this room for all of our younger guys.”

Assad first made his presence felt during Iowa’s preseason matchups. In a matchup against senior Cash Wilcke, Assad wrestled tough in a 3-2 loss. He pushed the pace and hand-fought hard and flashed a strong gas tank.

Since then, Assad said the biggest stride he’s made this season has been between the ears. He often goes with Wilcke, Nelson Brands, Jacob Warner and Michael Kemerer in practices. It requires a great deal of mental fortitude, he said, to drill with the nation’s best each day.

“There’s been some technical things I’ve changed and improved,” Assad said. “But my mindset, going into practice, I have to get ready for it every day. Some days, I’d come in and not be ready, and it would show on the mat. Having a strong mind has helped me a lot.”

“It’s about the attitude and the fight when you’re in here, not necessarily the scores or the results. But that has to correlate to scores and results in competition. You asked about Abe Assad — he’s on track.” 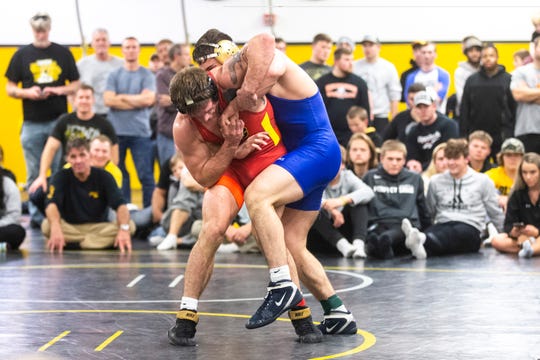 The Midlands will be his toughest test to date.

Among those expected to compete at 184 this weekend are eight ranked competitors in Trackwrestling’s latest national rankings. That includes Northern Iowa’s fourth-ranked Taylor Lujan, Iowa’s 10th-ranked Nelson Brands, as well as Wilcke and many others.

The Midlands has previously been a launching pad for some of Iowa’s current stars. Kemerer, currently No. 2 nationally at 174 pounds, placed fifth as a true freshman in 2015. Tony Cassioppi, Iowa’s fourth-ranked heavyweight, took seventh last season. Alex Marinelli, No. 2 nationally at 165, took fourth in 2016 and has won each of the last two.

Assad is excited for the challenge. He’s expecting a big crowd — Glenbard North is less than 15 miles from Sears Centre Arena — and hopes to give them a show.

“I’m not just throwing my hat into the ring,” Assad said. “I want to go in there, fight and score points. I know I can win this tournament.”

And if he does, perhaps he'll be the one handing out autographs after Monday's finals session.