Wrestling: Weight-by-weight breakdown of Friday’s dual between No. 1 Iowa and No. 2 Penn State

The Iowa wrestling team’s January home schedule has been a build-up to this week.

Wrestling: Weight-by-weight breakdown of Friday’s dual between No. 1 Iowa and No. 2 Penn State

The Iowa wrestling team’s January home schedule has been a build-up to this week, with each dual featuring a tougher, more talented opponent en route to this Friday’s matchup against No. 2 Penn State.

On Jan. 18, it was No. 9 Nebraska. The top-ranked Hawkeyes weathered a slew of close matches en route to a 26-6 win over the Huskers.

Last week, it was No. 3 Ohio State. Iowa muscled its way to a dominant 24-10 win over the Buckeyes.

Now, come Friday night, the Hawkeyes get the Nittany Lions, winners of eight of the last nine NCAA team titles and the No. 2-ranked team in the country.

A sold-out Carver-Hawkeye Arena will play host to what’s expected to be an electric matchup between the high-powered Hawkeyes (8-0, 5-0 Big Ten) and mighty Penn State (7-1, 4-0). Many more around the country will tune in via Big Ten Network when the dual begins at 8 p.m. 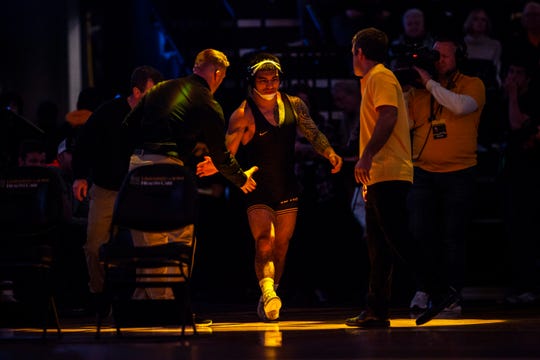 For Iowa, it’s an opportunity to cement itself as the team to beat in Division I wrestling. For the Nittany Lions, it's a chance to show the rest of the country that even in something of a transition year, they’re still title contenders.

“It’s highlighted, circled, asterisk,” Brands said. “At the beginning of the year, you do that for certain duals, to kind of point and see where you’re at, but now we’re here.”

The following is a weight-by-weight look at all 10 matchups, based on the probable lineups released by both teams this week. Of the 20 wrestlers expected to compete, 18 are currently ranked at their respective weights, including 12 in the top five and seven that are ranked either No. 1 or 2. They’ve combined for five NCAA titles and 20 All-American finishes.

Records and relevant information is included where necessary. Rankings are from Trackwrestling.

Lee, a two-time NCAA champion, has outscored his 10 opponents this season by a combined 137-8. Meredith is 11-8. This could be over quickly.

A battle of returning All-Americans from perhaps the toughest weight at the 2019 NCAA Championships. DeSanto beat Bravo-Young twice last year — 6-3 at the Big Ten tournament and 7-2 in the second round of the national tournament. Both are much improved from last season so expect some fireworks.

Max Murin is still on the mend, Brands said this week, so Happel gets the nod against Lee, a two-time All-American who’s 12-0 and considered a national title contender at a deep, deep weight this season. Happel lost to Ohio State’s top-ranked Luke Pletcher last week, so perhaps that experience will help him here.

Iowa's Spencer Lee might not have come to Iowa if not for Michael Kemerer. Hawk Central

Lugo is one win shy from No. 100 for his career, and was kept from reaching that milestone after losing to Ohio State’s second-ranked Sammy Sasso last week. Lugo is likely the favorite in this one, though Verkleeren is 12-3 with loads of potential. If Gardner goes, Lugo may be favored to get bonus.

A Young-Berge matchup would be among the more pivotal individual bouts in this dual meet, but Berge has battled injuries and has wrestled just once this season. If he doesn’t go, Pipher should get the nod. He's 8-9 but reached the finals of the Southern Scuffle last year and has wrestled tough against some top-tier guys this season. Young needs his A-game either way.

The first of two 1-versus-2 matchups. Marinelli, 14-0 this year, is 2-0 all-time against Joseph, beating him in the Iowa-Penn State dual two seasons ago and then again in the finals of the Big Ten tournament. Joseph, though, has the stronger resume. He's a three-time NCAA finalist and two-time champ who is 7-0 this year. Big, big swing match here.

The second 1-versus-2 matchup, and unlike the battle at 165, these two haven’t met in college. Kemerer has looked tremendous since bumping up to 174 and is 8-0 this season, but this weight belongs to Hall, a three-time finalist and national champ back in 2017 who is 15-0 this season. Another match that will help decide this dual.

An intriguing battle of true freshmen here, if only because of the clash of styles. Assad is well-built, strong and methodical. Brooks is longer-and-lankier with great technique. Assad is 19-3, Brooks is 7-1. Both have successful freestyle backgrounds. This could be the first of many matches between these two over the next four years. 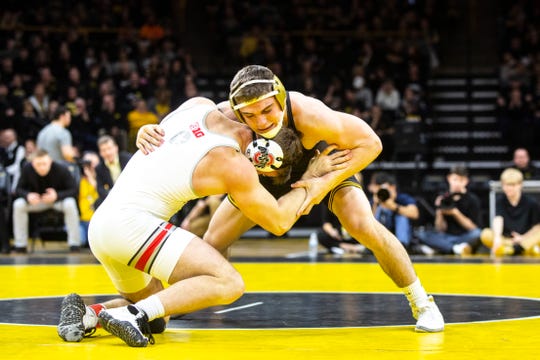 ► MORE: Inside the rise of Abe Assad, from nearly quitting to starting for No. 1 Iowa

Another intriguing matchup due to the clash of styles. Warner employs heavy hands and wears on his opponents. Rasheed, like Brooks, is longer and fast, and possesses a mean cradle. Warner was an All-American last season while Rasheed was an All-American at 197 in 2018. It sounds tiresome, but this is another key matchup that’ll play a huge factor in deciding the dual.

Another very interesting matchup. Cassioppi is likely the favorite, because of his strength and experience, but Nevills, a true freshman, has been impressive since entering the lineup. Both are undefeated, and depending on where the dual starts and how the dual unfolds, it could come down to this.