Mark Perry and Thomas Gilman are both leaving Iowa City.

The Hawkeye Wrestling Club is getting a makeover, as Mark Perry and Thomas Gilman are both leaving Iowa City.

After three seasons as the head coach of the Hawkeye Wrestling Club, Perry is leaving to join the coaching staff at Arizona State. He will be an assistant under Zeke Jones and alongside Lee Pritts and Frank Molinaro.

Gilman is on his way to State College, Penn., to join the Nittany Lion Wrestling Club, ending an 8-year tenure in Iowa City — first as a Hawkeye wrestler from 2012-17, then as a Hawkeye Wrestling Club competitor after graduation.

"But I feel like this is a good opportunity to grow my wrestling, my mind, and as a person."

Perry was a four-time All-American and two-time NCAA champion for Iowa from 2005-08. After coaching stints at both Penn State and Cal-Poly, the Oklahoma native spent six years at Illinois, working as an assistant under former Hawkeye wrestler Jim Heffernan.

He returned to Iowa City in May 2017, where he spent three years building up the Hawkeye Wrestling Club. Under his watch, numerous post-graduate wrestlers flourished in national and international competitions in the Olympic disciplines.

Gilman made two men's freestyle world teams, in 2017-18, and won a silver medal at the 2017 world championships with Perry in his corner. That came immediately after his Iowa career, where he won 107 career matches and was a three-time All-American.

A slew of former Hawkeye wrestlers, like Sam Brooks, Cory Clark, Brandon Sorensen and Nathan Burak, are all listed on the Hawkeye Wrestling Club roster. So, too, is Nodir Safarov, a two-time men's freestyle world-teamer for Uzbekistan.

Perry informed Iowa coach Tom Brands of his intentions to leave for Arizona State on Thursday. Brands supported the decision, according to an interview with Trackwrestling's Andy Hamilton.

"He hasn’t probably been pinged enough on some of these openings. So I think it’s a really good move for him and his family. I know he feels good about it. We feel good about it. We definitely wish him the best." 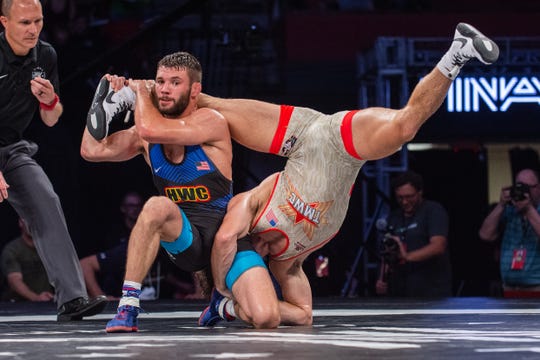 Thomas Gilman, a former Iowa wrestler, scrambles against Oklahoma State's Daton Fix at Final X on Saturday in Lincoln, Nebraska. Fix beat Gilman, two matches to one, to earn a spot on the 2019 men's freestyle world team. (Photo: Richard Immel/Special to the Register)

All of that helped bolster the Iowa wrestling program, too, which went 13-0 in duals, won the Big Ten regular-season and tournament titles and was the favorite to win the 2020 NCAA Championships until the novel coronavirus pandemic forced its cancellation.

Now, Perry will get an opportunity to coach college athletes again. He was a standout recruiter at Illinois, playing key roles in helping the Illini land Jesse Delgado and Isaiah Martinez, both two-time NCAA champions.

It's unknown if any Hawkeye Wrestling Club athletes will follow Perry. Arizona State's post-graduate equivalent is the Sunkist Kids Wrestling Club, founded in 1976. The search for his replacement is already underway.

Gilman, meanwhile, will don the Nittany Lion blue and white. The NLWC features Kyle Snyder, David Taylor and Zain Retherford, among others. Taylor won a 2018 world title. Retherford has made two world teams. Snyder, a three-time world and Olympic champ, has been on every world and Olympic team since 2015.

The NLWC trains out of Penn State, which has won NCAA team titles eight of the 10 years. Gilman's addition will undoubtedly help the Nittany Lions, both in terms of on-the-mat development and recruiting, in a similar fashion to how he helped Iowa.

Gilman's announcement came four years, to the day, after another former Hawkeye, Tony Ramos, left Iowa City after losing to Dan Dennis, yet another past Iowa wrestler, in the finals of the 2016 U.S. Olympic Trials.

A similar setup was in play this year, as Iowa junior Spencer Lee, a two-time NCAA champion and 2020 Hodge Trophy winner, was considered a favorite to make the 2020 U.S. Olympic Team at 57 kilograms (125 pounds), which is also Gilman's weight.

"The whole COVID-19 threw a wrench into everything," Gilman said. "I was planning on going through the cycle, making the team and winning the Olympics here with HWC, then after the Olympics, looking to make a change.

"I'm not going to Penn State to show up Iowa or anything like that. I love Iowa. I'm a Hawk. I'll always be a Hawk."

There is still a chance they could since the novel coronavirus pandemic postponed the Tokyo Olympics to 2021, but now they won't be training alongside each other beforehand.

"I think it's good for him if that's what he wants," Iowa associate head coach Terry Brands said in an interview with Flowrestling Friday night. "We don't want to hold anybody back, and I freaking love that guy. He's another one of them warriors.

"He laid it out there every single time for us and for himself. On my end, (him leaving) doesn't change how I feel about him. I deeply appreciate his approach to the sport of wrestling and his approach to excellence in life.