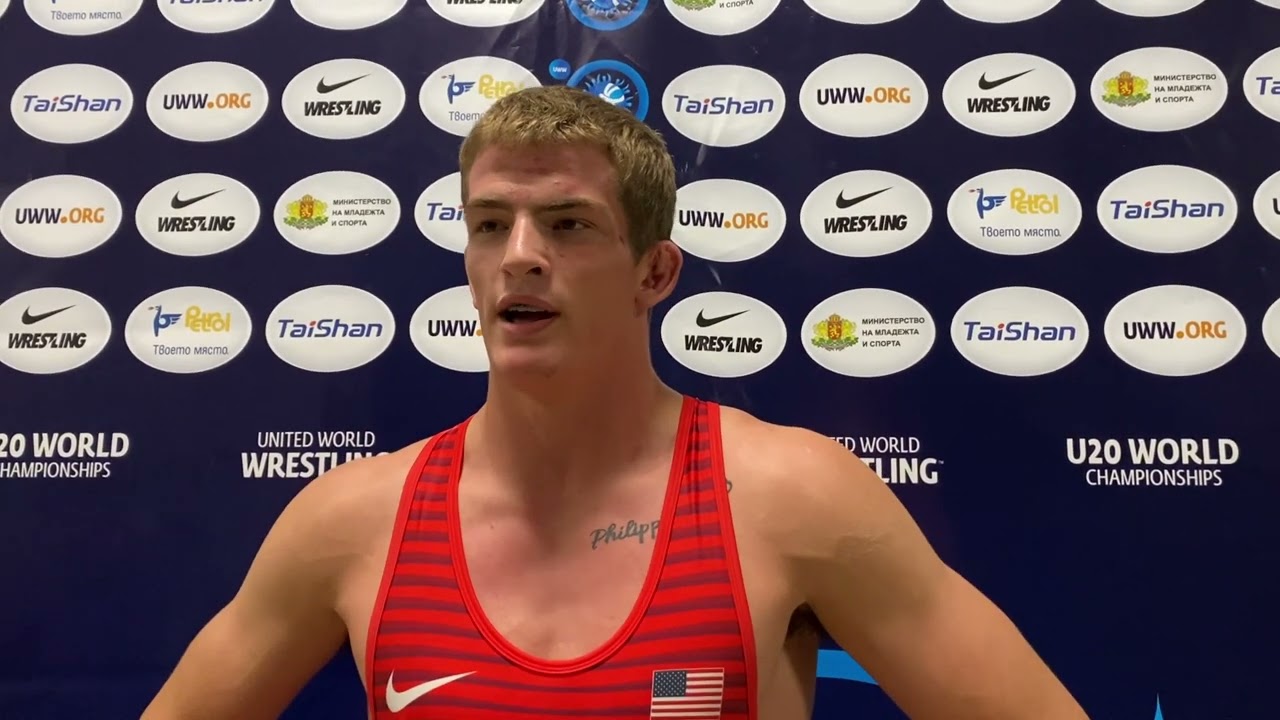 Normally, when news stops you cold, it’s usually pretty bad, so here’s something worth enjoying:

Ben Kueter is a world champion.

Here it is again:

Ben Kueter is a world champion.

Here's a different way to say it:

Ben Kueter, Iowa City High’s superstar senior athlete who is planning to both wrestle and play football for the Iowa Hawkeyes next year, won gold at the Junior men’s freestyle world championships on Tuesday in Sofia, Bulgaria.

"I am a world champ," Kueter told USA Wrestling afterward. "It's unreal to say that."

"Can I say one more thing?" he asked.

Kueter went 4-0 and stormed to first place at 97 kilograms (213 pounds). In Tuesday’s finals match, he pinned Turkey’s Rifat Gidak in exactly 100 seconds to become the first Iowa native to win a Junior world wrestling title in more than two decades.

This achievement not only adds a prestigious piece of hardware to Kueter’s trophy case, but adds context to his otherworldly athletic gifts.

He has steadily grown into Iowa’s top prep athlete, a four-sport star who is a household name in football and wrestling. He was on a relay team that took second at the Drake Relays. He played outfield for a Little Hawk baseball team that reached the state semifinals. He is a four-star linebacker prospect and, now, a world champion wrestler.

But even by those lofty standards, what Kueter did this week was special.

He outscored his four opponents by a combined 45-17 en route to gold. He won his first two matches by a combined 18-1. In the semifinals, Kueter won a 17-14 thriller over Georgia’s Luka Khutchua, during which he trailed 8-0 after just 23 seconds, rallied to tie it 9-9 by the end of the first period, then led 15-10 and scored late again to ice it.

In the finals, Kueter met Gidak, a 2021 Cadet world champion who beat his first three opponents by a combined 17-6. Gidak scored quickly for a 2-0 lead, but Kueter countered with his own takedown, erupted for a 10-2 lead thanks to a trap-arm gut wrench, then ran a bar-arm for the pin in 1:40 to win gold.

"I tried to use my folkstyle background," Kueter said in his USA Wrestling interview. "They don't wrestle folkstyle, but we do. He's not used to bar-arms, but I am. I put the bar-arm in, like a Spencer Lee tilt. I rolled through and he couldn't defend it."

More:How will Ben Kueter balance both football and wrestling in college? We asked others who did it.

Kueter is also now the 11th Iowa high-schooler to win a medal at the Junior world wrestling championships since 1973. In addition to Smalley, McGinness, Riley and Geneser, the list goes:

Kueter is also just the sixth American wrestler to make the Junior men’s freestyle world finals the summer ahead of his senior year of high school since 2000. That list includes some pretty elite wrestling company:

Consider their accomplishments since:

Kueter, meanwhile, wrestled mostly in a part-time capacity this summer. He also played baseball and prepared for the upcoming football season. He plans to play in City High’s preseason scrimmage this Friday against Clear Creek-Amana. The Little Hawks open their season on August 26 against Iowa City Liberty at Kinnick Stadium.

When the 2022-23 wrestling season begins, Kueter will attempt to become Iowa’s 32nd four-time state wrestling champion — fitting, since he wears No. 32 in football — and the sixth to finish his high school career undefeated. He is 72-0 for City High and has won three consecutive Class 3A state titles.

From there, he is all in on chasing two-sport stardom with the Hawkeyes. Kirk Ferentz is likely salivating at the thought of having a world champion wrestler play linebacker, and Tom Brands is giddy about having perhaps Iowa’s best high school athlete ever fortify the end of his lineup.

Those decisions will come later. For now, Kueter is a world champion. He reached the top by winning matches with stingy counter offense, then winning his semifinal out of a deficit, then winning his championship match with overwhelming offense — all reinforced by the belief that, here and now, it was his turn.

"I put so much work into this, and for it to come true, it makes me feel so good," Kueter said. "I'm so thankful for my family. I have the best support system in the world. It's hard to go out there and let those people down. I'm so thankful for them.

"You come to here, you expect to win. Period. That's what I did."

His performance has updated Iowa’s international wrestling history in real time, and has set a new bar for every Iowa high schooler from here on. He celebrated by taking a lap around Mat B inside Armeets Arena on Tuesday. He held up the American flag, the stars in his right hand, his eyes on a future brimming with seemingly unlimited possibilities.

Here was Kueter's path to a Junior world title this week in Sofia, Bulgaria.