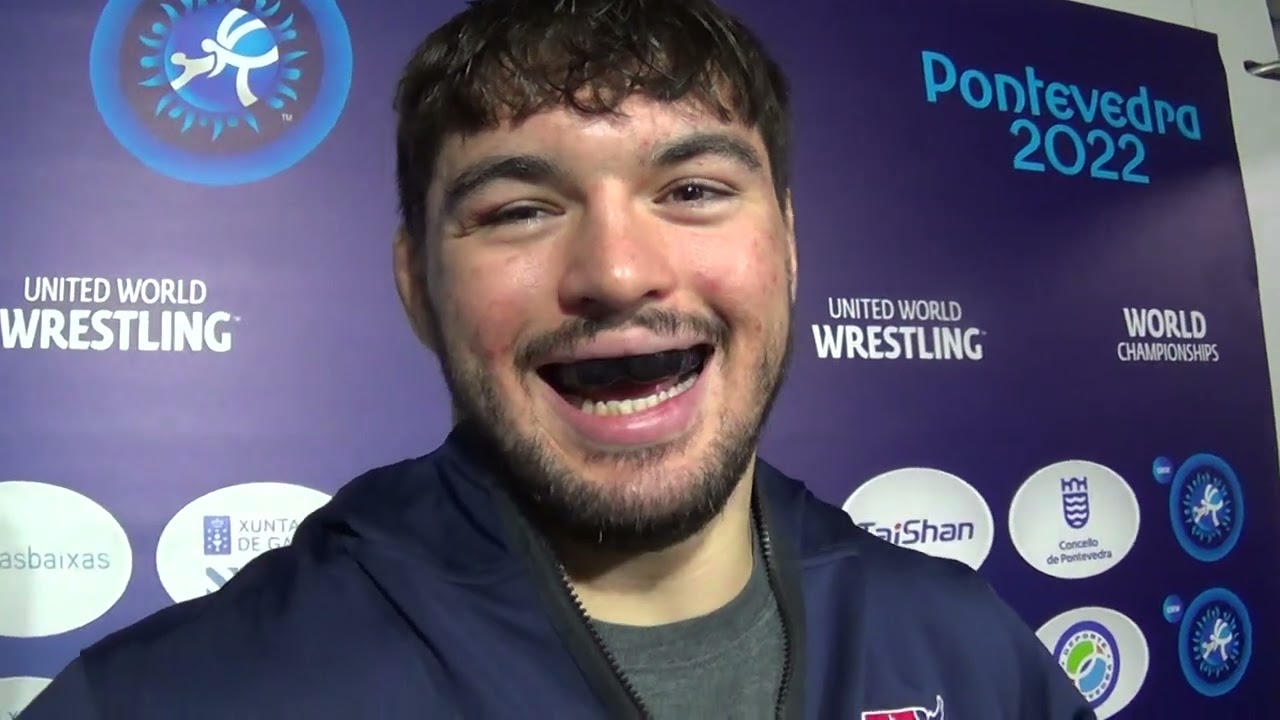 Tony Cassioppi kicked off his 2022-23 season by updating his international wrestling resume.

Cassioppi, the Hawkeyes' junior heavyweight, won a bronze medal at the U23 men's freestyle world championships this weekend in Pontevedra, Spain. He went 3-1 at 125 kilograms (275 pounds) to earn his second age-level world medal.

A year ago, Cassioppi stormed to first at the U23 world championships, becoming just the fourth American ever to win a U23 world title, joining Richie Lewis (2017), Bo Nickal (2019) and Emily Shilson (2021 in women's freestyle). He followed up by winning bronze and becoming USA Wrestling's first two-time U23 world medalist.

Cassioppi's bid to repeat as world champion was upended in Saturday's quarterfinal round. He won his first match by a 10-0 technical fall in just 93 seconds, then lost to Georgia's Solomon Manashvili in a stunning 16-4 technical fall. Manashvili led 8-0 in the first 68 seconds, led 12-4 at the break, then scored a 4-pointer in the second to win.

Manashvili then reached the finals, part of Georgia's team title-winning performance, which pulled Cassioppi into Sunday's repechage, giving him an opportunity to win bronze. He made good on that opportunity, securing a 33-second pin over Japan's Kai Shutto to advance to the bronze-medal match, then was declared the winner over Ukraine's Yurii Idzinskyi for bronze after Idzinskyi was deemed medically unable to compete, per USA Wrestling.

Cassioppi will return to Iowa City well ahead of the Hawkeyes' 2022-23 season-opener against California Baptist, set for Nov. 13 in Iowa City. Iowa's schedule is light through November, but Cassioppi will see both Penn State's Greg Kerkvliet, who's ranked second nationally at 285 pounds by InterMat, at the NWCA All-Star Classic on Nov. 22, and Penn's Ben Goldin, ranked 17th, when the Hawkeyes wrestle the Quakers on Nov. 26.

More:Iowa Hawkeye wrestling will be on TV nine times in 2022-23. Here's when and where.

Currently, Cassioppi is ranked fourth nationally by InterMat, behind Arizona State's Cohlton Schultz (whom he's beaten twice previously), Kerkvliet (whom he beat twice last year) and Michigan's Mason Parris (whom he's never beaten while in college). The two-time All-American is expected to be a key contributor for an Iowa Hawkeye team that begins the 2022-23 season ranked second in InterMat's Division I team poll.

Team USA scored 110 points for third in the men's freestyle team race at the U23 world championships, behind Georgia (141) and Iran (132). The United States finished the men's freestyle competition with five total medalists — and two of them had Iowa ties.

In addition to Cassioppi's bronze-medal performance, Tanner Sloan, an Alburnett grad who wrestles at South Dakota State, finished second at 97 kilos (213). Sloan went 3-1 overall and was one of three U23 world finalists this week for the U.S. men's freestyle team.

Sloan won his first three matches on Friday to reach Saturday's gold-medal final: 10-2 over Turkey's Mucahit Celik in round one, 6-3 over Georgia's Andro Margishvili in the quarterfinals, then 10-2 over Azerbaijan's Islam Ilyasov in the semifinals. He trailed for a grand total of 34 seconds in those three matches, 1-0 to Margishvili after surrendering a shot-clock point late in the first period. Sloan promptly scored a 4-pointer to lead at the break and ultimately win.

In the finals, Sloan fell 5-3 to Iran's Amirali Azarpira. He led 2-0 after the first, but gave up a series of step-outs and trailed 4-2 in the final minute. Sloan came within 4-3 on a step-out, then nearly scored a takedown at the buzzer to win, but the refs upheld the no-takedown call after a review.

This was Sloan's second age-level world championship event. He previously made the 2019 Junior world team but failed to medal. This time, he stormed into the finals to help Team USA to a third-place team finish. He will be a junior, eligibility-wise, for the Jackrabbits this season, and is a three-time NCAA qualifier at 197 pounds.

David Carr, a two-time All-American and NCAA champion for Iowa State, also competed at the U23 men's freestyle world championships this week, but finished 1-1 and did not medal. Competing at 74 kilos (163), Carr won 12-2 over Sonny Santiago, a North Carolina wrestler who repped Puerto Rico, then lost 4-3 to Georgia's Temuri Beruashvili in the quarterfinals. Beruashvili then injury-defaulted from his semifinal match, eliminating Carr from the competition.

The United States tied for second in the women's freestyle team race at the U23 world championships, scoring 107 points to finish behind Japan (225) and match Ukraine, and a pair of Hawkeye women's wrestlers aided the American's silver-medal team finish.

More:Iowa's 2022-23 wrestling schedule is out. Here are the key dates to know.

Taylor, a Senior National Team member and U.S. Open champ, won her first two matches — a 36-second pin over Greece's Aikaterini Vekri, then a 12-2 technical fall over Kazakhstan's Ellada Makhyaddinova — to reach the semifinals. There, she fell to Japan's Haruna Okuno 11-1. Okuno ultimately won gold. Taylor dropped to the bronze-medal match, where she lost again, 3-3 on criteria to Germany's Anastasia Blayvas.

Valencia's only match was a 3-0 loss to Tunisia's Sarra Hamdi in the first round. Hamdi then lost to Japan's Yui Susaki, the 2020 Olympic gold medalist and three-time Senior world champ, in the quarterfinals, which eliminated Valencia. Hamdi then won twice to win bronze.