Drew Foster is an NCAA Champion.

PITTSBURGH, Penn. — There are purple boards inside the Northern Iowa wrestling room back in Cedar Falls. There the Panther All-Americans and national champions are honored.

Those who place the highest at their respective weights are always listed first. When it comes time to add the 2019 All-Americans, Drew Foster’s name will be at the top, for he did something on Saturday no Panther wrestler has done since 2000.

Foster defeated Max Dean, 6-4, in the finals of the NCAA Championships at 184 pounds here at PPG Paints Arena. He becomes the first Northern Iowa wrestler to win an individual national title since Tony Davis won at 149 in 2000.

“It means a bunch,” Foster, a senior, said. “But I can't take all the credit at all. I got teammates I work out with. I have coaches that believe in me, that help coach me.”

Foster also becomes the first UNI wrestler to win an NCAA title under head coach Doug Schwab. He went 28-5 this season. His victory on Saturday night also helped the Panthers tie for 13th place in the team race, which is the program’s best finish under Schwab, and its highest since taking 11th in 2003. 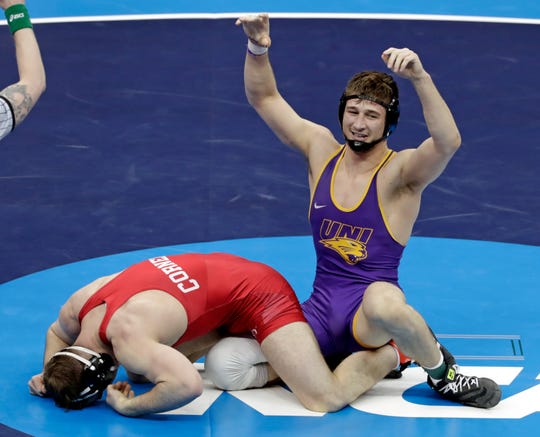 The finals matchup against Dean was an opportunity for revenge. Dean beat Foster, 6-5, back in December at the West Gym. On Saturday, Foster returned the favor, using the same attack-first strategy that led him to the finals to begin with.

Foster opened the scoring with a takedown in the opening minute, but Dean fought back with an escape and a takedown for a 3-2 lead. Foster then rode Dean for most of the second period and even gave up a stalling point along the way, but Dean escaped in the final moments for a 4-2 lead.

In the third, Foster escaped to close within 4-3, and he had one minute, 10 seconds of riding time in hand. With less than 30 seconds left, Foster dropped to a sweep single and blew Dean over for the takedown. He rode Dean out the rest of the way, and Schwab started a historic celebration in the coaches corner.

“A lot of people have been saying that we haven’t had one for a long time,” Schwab said afterward. “You know what? When 2019 goes up on that board, he’s the first one to go up on that board.

“We’ve been talking for a long time about who’s going to be that first. The first one is Drew Foster.”

Foster settled into the post-match press conference afterward and took in the moment. In some ways, this was perhaps the most remarkable accomplishment of his wrestling career.

When he was a senior at Mediapolis High School, he won 54 matches but took second at state. When Northern Iowa assistant coach Randy Pugh called others inquiring about Foster for recruiting background, he was told that Foster was a great kid, but not a Division I wrestler.

But Pugh convinced Schwab and the rest of Northern Iowa’s coaching staff that Foster could pan out. It was a rough start — he went 15-18 as a redshirt freshman, with a 1-9 record in duals — but as a sophomore, he went 26-6 and finished seventh in the country.

Two years later, he became Northern Iowa’s first NCAA finalist since Sean Stender in 2005. He caps his career as a two-time Big 12 champion, a two-time All-American. He ended up winning 95 matches during his four seasons.

He smiled, then continued: “Shoutout to Randy Pugh. The guy's believed in me since day one, been by my side. Been in my ear — he was in my ear the whole match. I owe that guy a lot.”

Throughout the week, it was clear that Foster wasn’t as well known as some other wrestlers. The public-address announcer said he was from Burlington, Illinois. A television broadcaster accidentally called him Doug.

After Saturday night, it’ll be hard for people to forget about Drew Foster, for he is a national champion.