There’s no shortage of Iowa ties at the 2019 NCAA Wrestling Championships this week.

Max Thomsen, UNI's 149-pounder, discusses the Panthers' potential and what it'll take to contend at the NCAA Championships in March. Des Moines Register

There’s no shortage of Iowa ties at the 2019 NCAA Wrestling Championships this week.

In total, 12 Iowa natives will be competing this weekend. Nine wrestle for the in-state programs — one at Iowa, four for Iowa State and another four at Northern Iowa. Three others qualified while competing for out-of-state teams.

Here, we offer a rundown of all the Iowa natives, organized by weight, along with their past schools, credentials and first-round matchups, as well as possible paths through the tournament.

Northern Iowa's Jay Schwarm is seen during a match at 125 during a NCAA Big 12 wrestling dual on Thursday, Feb. 21, 2019 at the West Gymnasium in Cedar Falls, Iowa.  (Photo: Joseph Cress/Iowa City Press-Citizen)

Schwarm, a two-time state champion from Bettendorf, has been the Panthers’ starting 125-pounder for three years. The junior is making his second NCAA tournament appearance after a fifth-place finish at the Big 12 Championships.

Schwarm and McGee have never wrestled before. Win and it’s likely a matchup against Virginia’s Jack Mueller in round two. Lose and a wrestleback path likely includes Illinois’ Travis Piotrowski and, perhaps, N.C. State’s Sean Fausz. 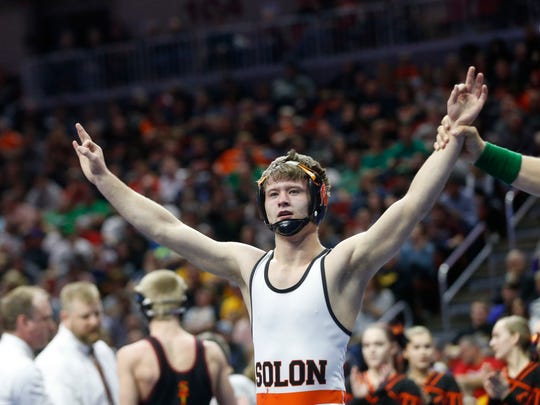 West won 210 matches and three state titles during four years at Highland (Riverside) and Solon. The redshirt freshman qualified for the NCAA Championships for the first time after taking third at the Mid-American tournament.

West and Lee wrestled at the Midlands Championships in December. Lee won by a 17-0 technical fall. If he pulls the upset Thursday morning, West would get the winner of Iowa State’s Alex Mackall and Fausz. 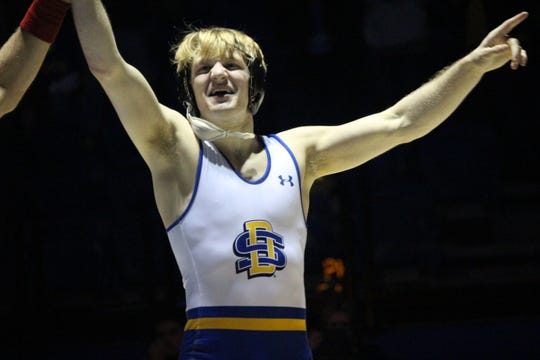 Pohlmeyer won a state title in 2013 and reached the state finals in 2014 while wrestling for Johnston. After placing fifth at the Big 12 tournament, the junior qualified for his second national tournament. He is the only South Dakota State wrestler in this week's field.

Pohlmeyer and Heil have never wrestled before. Win and he could likely face North Carolina’s Austin O’Connor in round two. Lose and a wrestleback path could include Penn State’s Brady Berge and Penn’s Anthony Artalona.

Thomsen became Iowa’s 24th four-time state champion in 2015. He won 210 matches while competing for Union of LaPorte City. The 2017 All-American is making his third-straight trip to the NCAA Championships.

Thomsen, the No. 15 seed, met Prince at the Cliff Keen Open in Las Vegas in December and won, 12-6. If he repeats that effort on Thursday morning, he’ll likely get Ohio State’s Micah Jordan, the 2 seed, in the second round. 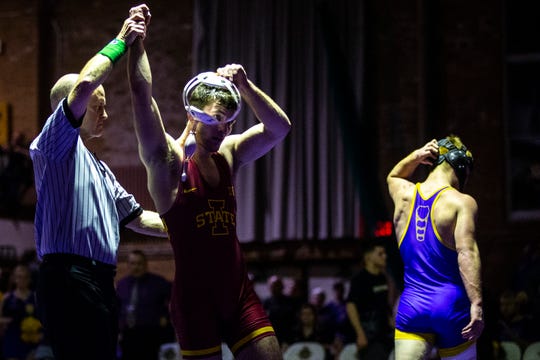 Iowa State's Chase Straw has his hand rasied after scoring a decision at 157 over Northern Iowa's Paden Moore during a NCAA Big 12 wrestling dual on Thursday, Feb. 21, 2019, at the West Gymnasium in Cedar Falls, Iowa. (Photo: Joseph Cress/Iowa City Press-Citizen)

Straw earned his first trip to the NCAA Championships by winning the Big 12 title at 157 pounds. The junior won a state title at 152 for Independence in 2015, capping his career as a three-time state medalist.

Straw and Bleise have never met. This is a tough first-round match for a conference champ. Win and Old Dominion’s Larry Early likely awaits in round two. Lose and a wrestleback path might include Princeton’s Quincy Monday and Arizona State’s Christian Pagdilao. 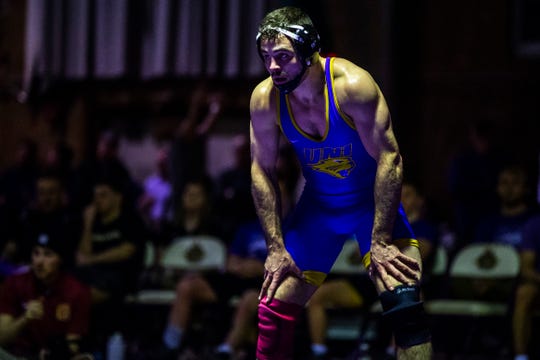 Steiert was a three-time state finalist and two-time champ for Waverly-Shell Rock, and twice qualified for the NCAA Championships before redshirting last season. The junior took third at the Big 12 tournament to qualify again this year.

Steiert and Martin have never met, but Steiert, the 11 seed, is favored. Win and Michigan’s Logan Massa, the 6 seed, likely awaits in round two. There is no easy path at this weight.

Iowa State's Marcus Coleman has his arm raised after Iowa has an injury default at 174 during a NCAA Cy-Hawk series wrestling dual on Saturday, Dec. 1, 2018, at Carver-Hawkeye Arena in Iowa City. (Photo: Joseph Cress/Iowa City Press-Citizen)

Coleman won 156 matches and three state titles for Ames before deciding to stay home and wrestle at Iowa State. The redshirt freshman qualified for his first national tournament after a fifth-place finish at Big 12s.

Coleman wrestled Finesilver at the Southern Scuffle and lost, 10-2. If he can flip that result, he’ll likely see Lehigh’s Jordan Kutler in round two. Lose and a wrestleback path could include Edinboro’s Jacob Oliver and Purdue’s Dylan Lydy and, possibly, Utah Valley’s Kimball Bastian or Ohio State’s Ethan Smith. 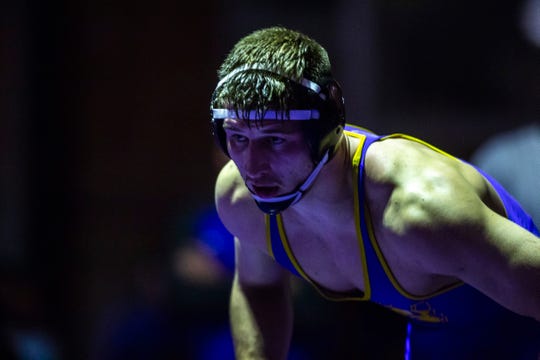 Foster won 167 matches and was a three-time state medalist for Mediapolis, including a state runner-up finish in 2014. The senior won the Big 12 tournament to qualify for his third national tournament.

Foster, the 6 seed, has never wrestled LaFragola, but has a nice path to potential make a run this week. Binghamton’s Lou Deprez is the likely round two opponent and Virginia Tech’s Zach Zavatsky is the likely quarterfinal foe. Foster has beaten them both this year.

Lyon won 187 matches and two state titles for Western Dubuque. He qualified for his first national tournament after taking seventh at the Big Ten Championships, where he lost to Iowa’s Cash Wilcke in the wrestlebacks.

Lyon has never wrestled Preisch, the 8 seed. If he pulls the upset, Nebraska’s Taylor Venz likely awaits in the quarterfinals. Lose and a wrestleback path could include Iowa State’s Sam Colbray and, possibly, North Carolina’s Chip Ness, a 2018 All-American. 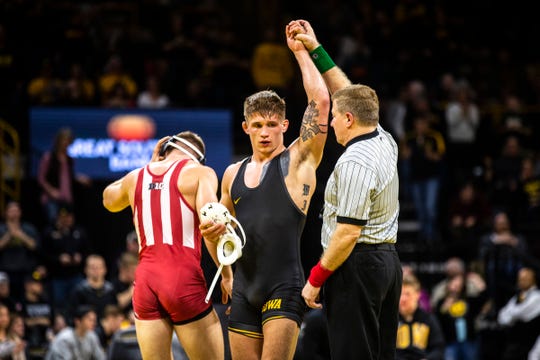 Wilcke, the Hawkeyes’ lone Iowa native to reach this week’s national tournament, won two state titles for OA-BCIG. The junior qualified for the NCAA Championships for a third time after taking fifth at the Big Ten tournament.

Wilcke, the 12 seed, and Gravina were supposed to meet for fifth place in Minneapolis, but Gravina medically forfeited instead. If Wilcke wins, Cornell’s Max Dean, a 2018 All-American, is the likely round-two opponent.

Iowa State's Willie Miklus wins his match against Missouri's Wyatt Koelling at 197 during the Cyclone's last dual of the season on Sunday, Feb. 24, 2019, in Hilton Coliseum.  (Photo: Kelsey Kremer/The Register)

Miklus was a four-time state finalist from 2009-12. He finished as a runner-up twice for Ballard, then won two titles for Southeast Polk. He transferred to Iowa State after becoming a three-time All-American at Missouri.

Miklus and Roetman have never wrestled. The draw sets up that Miklus, the 6 seed, could see Oklahoma State’s Preston Weigel in the quarterfinals in a rematch from the Big 12 finals. That would put him one win from becoming a four-time All-American. 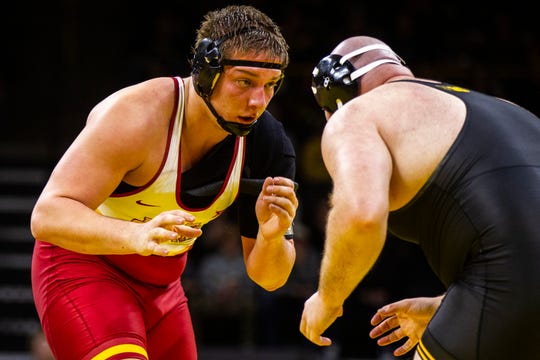 Gremmel won 168 matches, was a three-time state finalist and a 2016 state champion for Dubuque Hempstead. He qualified for his first national tournament after a fifth-place finish at the Big 12 Championships.

Gremmel and Hilger, the 7 seed, have wrestled twice, both during the 2017-18 season. He beat Hilger, 4-2, at the UNI Open, then lost by fall at the Willie Myers Open. If he wins Thursday, Maryland’s Youssif Hemida is the likely round-two opponent. Lose and the wrestleback path could include Buffalo’s Jake Gunning, who’s beaten Gremmel, and Pittsburgh’s Demetrius Thomas.

When: March 21-23
Where: PPG Paints Arena, in Pittsburgh, Pennsylvania
Watch: Every morning on ESPNU, every night on ESPN, everything on ESPN3