NCAA tournament bracketology: Why Gonzaga is No. 2 seed, mid-majors could nab at-large bids

Gonzaga has the No. 2 NET score but its credentials are still lacking. Then UNC-Greensboro and Belmont are making at-large bid noise as mid-majors.

NCAA tournament bracketology: Why Gonzaga is No. 2 seed, mid-majors could nab at-large bids

Editor's note: This story has been updated with the latest NCAA tournament projections as of Feb. 8.

There are two noticeable differences between USA TODAY Sports' latest bracket projection and other bracketology boards. First is Gonzaga currently slots in as a No. 2 seed, not a No. 1. The other is that mid-majors Belmont and UNC-Greensboro are two of the last four teams in the field of 68 — as at large-bids — while  ACC member like North Carolina State is on the outside looking in.

Here's why Gonzaga (22-2, 9-0 WCC) is not a No. 1 seed: The Bulldogs play in the West Coast Conference, a league with no other NCAA tournament-caliber teams and just two teams entering Thursday ranked in the top 50 of the NET (the NCAA's new metric replacing the RPI); Saint Mary's is No. 47 and San Francisco is No. 50. 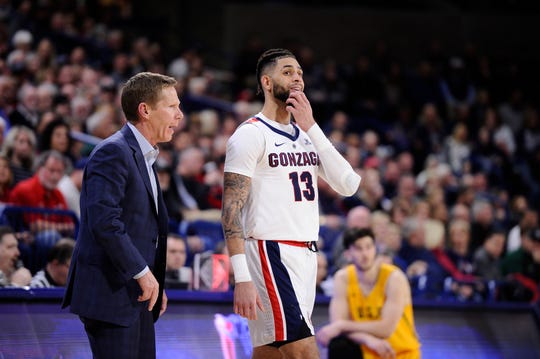 While the 'Zags have the second-best NET score in the country, the selection committee will quickly notice Gonzaga's No. 44 overall strength of schedule and that it only has four Quadrant 1 (top-30 home, top-75 road) wins — with just one chance (at Saint Mary's on March 2) of adding any more to the résumé the rest of the way. Meanwhile, current No. 1 Kentucky has six Q1 victories with ample chance to bulk that up in an improved SEC. Gonzaga's non-conference win over Duke can only hold so much weight while UK's wins over North Carolina, Louisville, Kansas and a handful of decent SEC teams add up.

And here's why two mid-majors are in the field over a power conference team with a much better NET score: Belmont of the Ohio Valley and UNC-Greensboro of the Southern Conference are beneficiaries of two other talented teams in their own league — Murray State in the OVC and Wofford in the Southern. While their individual NET scores (UNCG is No. 52 and Belmont is No. 63) are well behind North Carolina State's No. 34 NET score, the rest of their credentials aren't. The Wolf Pack's non-conference strength of schedule ranks 351st out of 353 teams in Division I. If the committee is looking for teams that challenged themselves in the non-conference slate, then N.C. State (16-7, 5-6 ACC) might not be able to use a loaded ACC slate to go dancing.

Granted, there are a bevvy of opportunities for signature wins in the ACC, but the league isn't what it's been in years' past -- depth wise, at least. For instance, a Nebraska team that is 13-10 overall and 3-9 in the Big Ten is still barely in the projected field. That's because the Cornhuskers' two Q1 wins hold weight against N.C. State's zero. 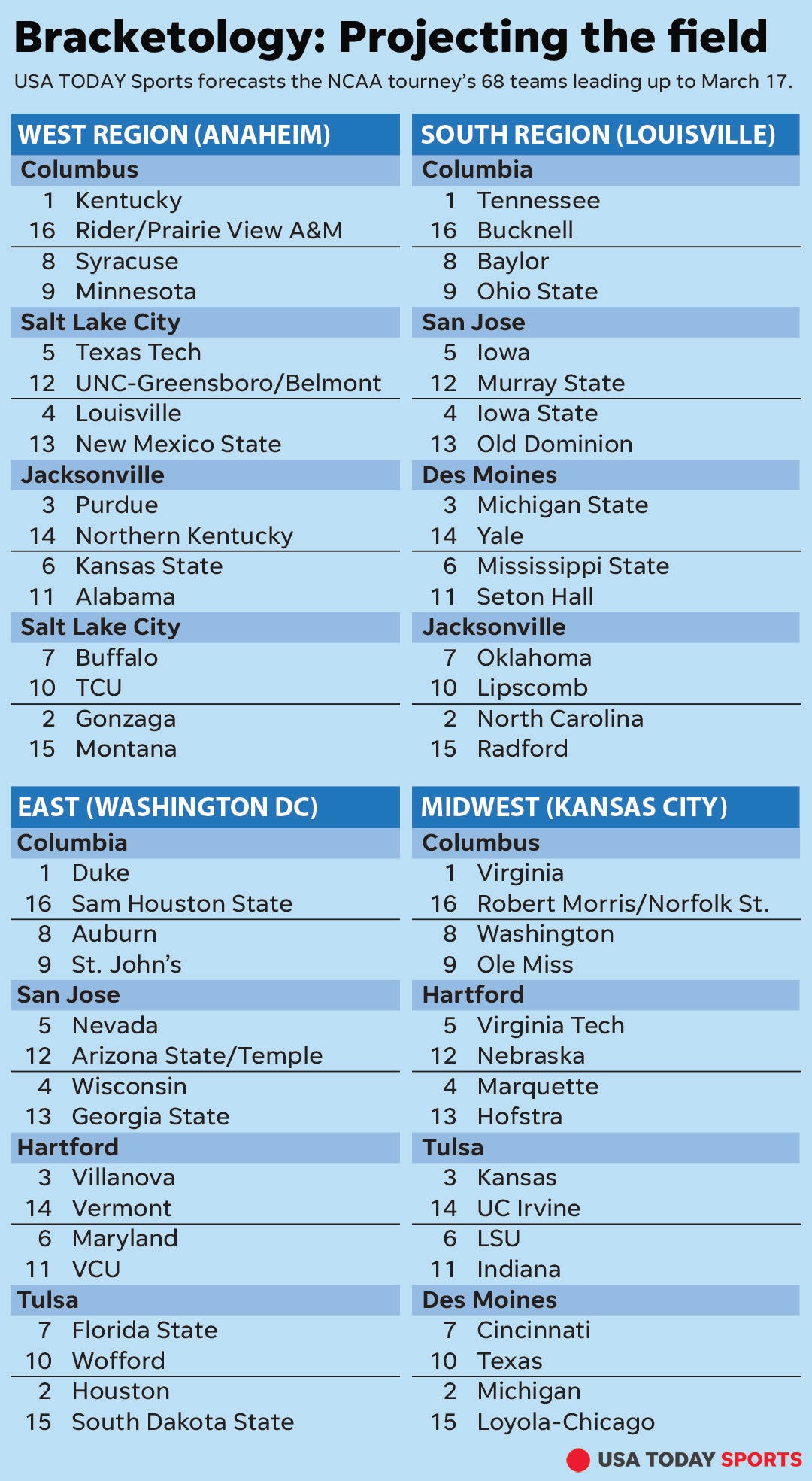 Note:  Mostly all statistical data is used from WarrenNolan.com. The NCAA's new NET rankings are also considered; that was rolled out at the beginning of 2018-19.

About our bracketologist: Shelby Mast has been projecting the field since 2005 on his website, Bracket W.A.G. He joined USA TODAY in 2014. In his sixth season as our national bracketologist, Mast has finished as one of the top three bracketologists in the past five March Madnesses. He’s also predicted for The Indianapolis Star, collegeinsider.com and is an inaugural member of the Super 10 Selection Committee. Follow him on Twitter @BracketWag.