NCAA tournament bracketology: The Pac-12 is horrid, and the selection committee will notice

Never has a power conference been this bad. Right when it seemed the Pac-12's 2018-19 couldn't get any worse, Washington and Arizona State plummet.

NCAA tournament bracketology: The Pac-12 is horrid, and the selection committee will notice

Editor's note: This story has been updated with the latest NCAA tournament projections through games on Feb. 28.

Never has a power conference been this bad. Right when it seemed like the Pac-12's disastrous 2018-19 campaign couldn't get any worse, league leader Washington lost to bottom-feeder California to give the Bears their first conference win all season. When the discrepancy from first to last is that irrelevant, it simply illuminates what statistics already verify: The Pac-12 is the worst power conference this year by a mile — ranking last among the power seven in the NET, the NCAA's new metric in place of the RPI.

Moreso, the six power conferences in front of the Pac-12 all have non-conference winning percentages in the 70-percent range. The Pac-12's is 61%. Meanwhile, mid-major conferences like the West Coast and Mid-American are above 63% thanks to their league leaders Gonzaga and Buffalo. Had the RPI still be a major consideration this year, it'd be worth noting that the Ivy League and Southern Conference both would be just a percentage point or two lower than the Pac-12. 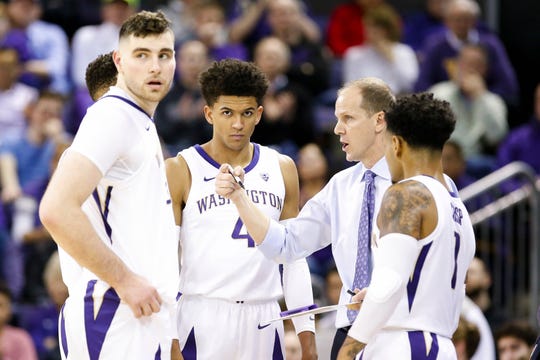 Thursday night also saw Arizona State, one of the seemingly comfortable bubble teams, lose at Oregon by 28 points. Um, what? This game was on the road and the committee examines a team's whole body of work. But a result like that was enough to throw the Sun Devils' No. 11 seed out the window and replace it with a No. 12-seed for the play-in game in Dayton — where Bobby Hurley's team was last year.

MARCH MADNESS: Five story lines ahead of the NCAA tournament

Washington's loss moves the Huskies to the No. 8 line and this team is still likely in — but only because of a weaker-than-usual bubble this year. Still, don't expect the selection committee to reward the Pac-12 for having a majority of teams hovering around the 75-100-line in the NET. All that illustrates is a conference's mediocrity more than its parity. The NET might be about assessing how good teams are as opposed to on-paper considerations the RPI favored. But it's not the only metric the selection committee will be looking at. It's only part of the formula for determining a team's worthiness in the NCAAs.

The Pac-12 is also hurt because of struggling so bad in non-conference action. Then look at mid-major conferences like the Southern or Ohio Valley. Teams from these leagues not only challenged themselves out of conference, but won there, too. So that's why a team like Wofford, from the Southern, is ahead of Washington on the seeding line. And it's also why Belmont, a team from the OVC, is higher than Arizona State. Both are reflected on today's bracket.

The committee wants the best teams dancing, and too often that narrative centers on power conference teams looking like the obvious beneficiary of playing better teams regularly. While that argument might hold up for the ACC or Big East, it shouldn't for the Pac-12. Mediocrity will be noticed, and as such Washington and Arizona State (if the Sun Devils squeeze in the field) will suffer the seeding consequences. 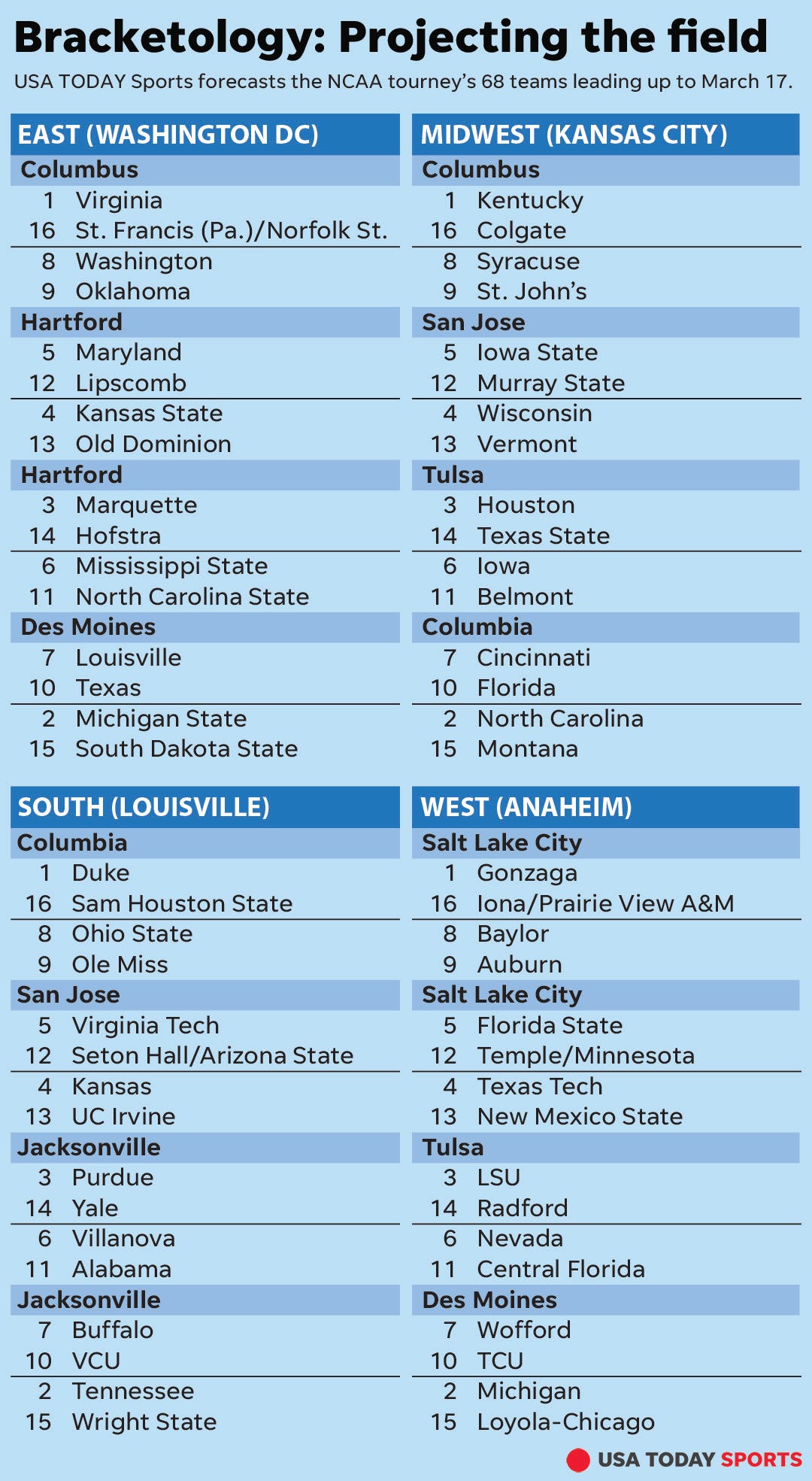 • Others considered for at-large bid (in no particular order): Furman, Butler, Saint Mary's

Note:  Mostly all statistical data is used from WarrenNolan.com. The NCAA's new NET rankings are also considered; that was rolled out at the beginning of 2018-19.

About our bracketologist: Shelby Mast has been projecting the field since 2005 on his website, Bracket W.A.G. He joined USA TODAY in 2014. In his sixth season as our national bracketologist, Mast has finished as one of the top three bracketologists in the past five March Madnesses. He’s also predicted for The Indianapolis Star, collegeinsider.com and is an inaugural member of the Super 10 Selection Committee. Follow him on Twitter @BracketWag.